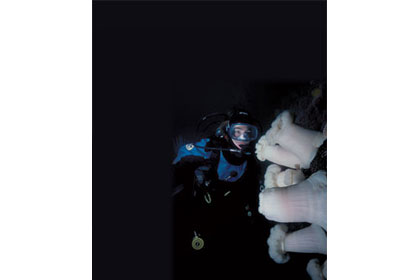 Each weekend Monterey’s fleet of charter dive boats speeds past Point Pinos as they head south to Carmel Bay and Big Sur. On their way they pass over some of the best diving in Monterey County — pristine reefs offshore of Point Pinos, which in Spanish means “Point of the Pines.” These are infrequently dived because they are exposed to the wind and swell, but on very calm days, you needn’t go farther for good diving. Aumentos Reef is one of the best dives near Point Pinos.

The name of this site is likely derived from one of Monterey’s first European residents. “Aumentos” first appeared on the charts from the 1857 Coast Survey. It is a corruption of  “Armentas” from the rancho of Jose Maria Armenta, the original Spanish Land Grant owner of the property around Point Pinos. Aumentos Reef should not be confused with Aumentos Rock, which is also on the charts and is close to Eric’s Pinnacle. Old time divers recall this site as George’s Reef, named by George Gregor, a captain from Marin Skin Diving who first dove this site in the mid 1970s.
The bottom offshore of Aumentos Reef begins as a rock and sand patch reef in 80 to 85 feet of water and begins to rise up in gentle steps to about 60 feet. The bottom then juts up more steeply in a series of massive granite walls with high points that come to within 40 feet of the surface. The inshore side the reef drops off in steps to 50 to 55 feet and remains at this depth until one encounters Inner Chase Reef. The shallow area is composed of massive, square-angled blocks that create a broken ridge top. This is a fun area to explore with deep cracks and valleys. The structure of the reef reminds me of what it would be like to soar along city skyscrapers.
The top of the reef is covered with a thick carpet of Corynactis anemones. Some patches are bright red, others are orange and still others are a beautiful lavender. Between the patches of Corynactis are colonies of bryozoans, yellow zoanthid anemones and patches of brightly colored sponges. Every square inch of rock is covered with some form of encrusting invertebrate. In fact, it is difficult to find any exposed rock at all. This is one spot where you do not have to go below 60 feet to find excellent diving. In fact, the most colorful parts of the reef are shallower than 50 feet.
As the reef drops a bit deeper the rock walls are covered with fluffy, white Metridium anemones. Go deeper and the rocks are spotted with bright red fish-eating anemones and encrusting sponges. This is a great place to look and photograph marine life, not hunt it. Lingcod and cabezon are normally found on the bottom or back in cracks, while sheephead and surfperch are frequently found wandering the top of the reef.
Above the reef and between the anemones and rocks are plenty of rockfish. Huge schools of blue rockfish circle the reef, while kelp rockfish hunt among the kelp fronds. Gopher, copper and brown rockfish rest on the bottom or in cracks, patiently waiting to ambush a small fish or crab. These rockfish are very similar in morphology, but differ in coloration, behavior and feeding habits. This allows very similar species to coexist on one reef without directly competing with each other.
Because this reef is near deep water, you should remember to look out into the water column for what may be passing by. In summer they are often many jellyfish, and in winter you might catch a glimpse of a migrating gray whale. Harbor seals and sea lions frequently accompany divers throughout the year.
Monterey charter boat skippers are often pressured by their passengers to head south to Carmel Bay and Big Sur. Yet, there is still most excellent diving to be found in the bay, if you know where to look. Next time you are on one of Monterey’s charter boats you might ask about Aumentos.
At-A-Glance
Location: approximately 1/2 mile offshore of Pacific Grove, Monterey Bay. To locate the reef start way out and line up the south side of the foot of Esplanade Street with the intersection of Esplanade Street and Shell Avenue (first fork in Esplanade). Motor on this lineup until the bottom begins to rise up. Those with GPS may find it at 36° 38.319′ N, 121° 55.273′ W.
Access: Boat dive only. Small boats may be launched from the Monterey Breakwater. This site is frequented by Monterey charter boat operators.
Diving Depths: 40 to 90 feet.
Visibility:  15 to 50 feet.
Skill: Intermediate.
Conditions: Highly variable; usually moderate, sometimes strong currents; watch for boat traffic.
Hunting: Aumentos is part of the Pacific Grove Marine Gardens State Marine Conservation Area, where only finfish may be taken.
Photography: Great wide angle for reef scenes, great macro for Corynactis, nudibranchs and other invertebrates.
← Previous Post
Next Post →