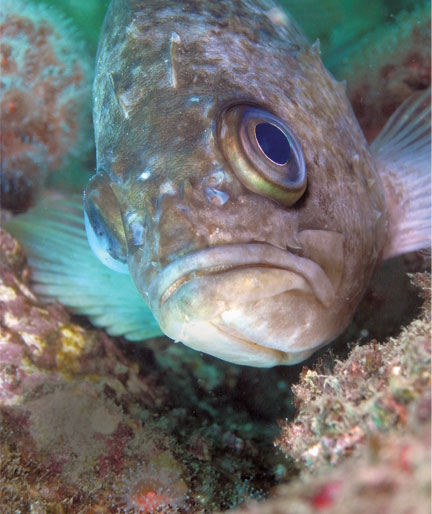 Santa Cruz Island’s Coches Prietos anchorage means “dark pig” in Spanish, but in my mind the dive site off the east end point will forever be known as Baby Sheephead Rocks. I’ve tried for many years to get a decent photo of a juvenile sheephead. They’re not uncommon, but the darned things just won’t sit still. For whatever reason, on a recent dive at Coches Prietos I encountered not a dark pig but a photo hog — a lovely juvenile sheephead that parked itself in front of my lens for quite a while.

Coches Prietos lies on the backside (seaward) of Santa Cruz Island. Often winds from the northwest can hit the island hard with rough seas. With that, boats will find refuge in the anchorages at Albert’s Cove and Coches Prietos. It’s a bonus that these locations have great diving. Probably the best dive spot here is at the eastern point of Coches Prietos.

The rocks extend outward from the point in a series of large boulders that are big enough to be called pinnacles that jut upward from a bottom depth of 40 feet to within 20 feet of the surface. The rocks are tumbled together to form multiple crevices, holes, and overhangs holding a variety of fishes and other creatures. Tucked away in the crevices are small lobster and their predator, the octopus. You’ll also find horn and swell sharks, calico bass and rockfish. Hovering over the reef are small sheephead, both female and male.

Up in the shallows the gaps between the boulders can be quite surgy so use caution. Also if you head east around the corner you could run into some strong currents.

Out from the boulders the ridge extends seaward with numerous ledges and groves. Max depth at the end of the ridge is about 55 feet. While the crevices under the boulders are fun, it is the ridge that is my favorite part. I had the choice of searching for photo material in the kelp forest or outward along where the sand meets the reef. Spying in the crevices I saw multiple shiny chestnut cowries, the only true cowry on the west coast of North America. Their dark rich nut-brown shiny luster is quite attractive. I also found some small lingcod, nudibranchs, and bat and blood stars. There is no shortage of photo material.

Don’t bypass the sand environment. Sightings of bat rays are common. Although you would think differently, halibut are not here. Again, this seems to be a great place for the photographer. Ever seen a sea mouse? You can’t miss them on the sand. They resemble a squatty urchin with a slicked-back hairdo. Exceptionally large sheep crab can be found here, too. On both my dives here I found the same individual patrolling the nearby sand. I nick-named him stumpy for his broken claw that did not hinder his mobility but I’m sure made his defenses diminished. I have seen people catch and try to eat these adorable spider crabs. While edible, their ultra-hard shell makes it a huge amount of work. My suggestion, don’t bother.

With 77 miles of coast, Santa Cruz Island has no shortage of dive sites. But when the strong winds blow, and dive boats have to hunker down in a good anchorage, you can enjoy the shelter and the scuba diving to be had at Coches Prietos.

Access and Facilities: Boat only. Several dive charter boats from Santa Barbara and Ventura. Private boat ramps there as well

Photography: Excellent for little critters especially on the outer ridges