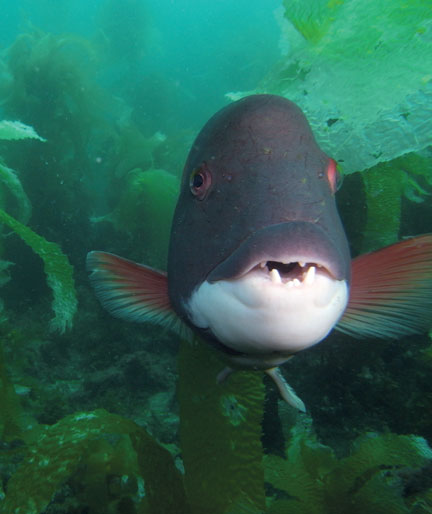 Garbage Cove! What kind of name is that for a dive site?! In spite of its unattractive name, the diving in this small cove is extraordinary. So just how did this dive location get its rather unattractive name?

Early in the 20th century a much-needed lighthouse was built on the east end of East Anacapa Island. Construction of the lighthouse and other buildings was completed in 1932, making this the last lighthouse to be built on the West Coast. In the late 1930s Anacapa Island, along with Santa Barbara Island, became the Channel Islands National Monument, the precursor to the now five-island Channel Islands National Park. Additional facilities needed to be built on the island adjacent to the existing lighthouse and more construction trash appeared. It was decided that the best way to dispose of the trash was to shove it into a natural depression in the island just above a beautiful cove on the mainland side of east end of East Anacapa Island. Thankfully, none of the debris ended up in the water, nor can any even be seen from sea level but the name Garbage Cove stuck.

Garbage Cove is just to the west of Landing Cove where non-diving visitors can visit via a small dock and many stairs. The views from atop the east island are breathtaking.

The entire mainland side of Anacapa’s three islands (East, Middle, and West) has become a remarkable place to dive. A patchwork of marine preserves is knitted together into a solid stretch several miles long that encompasses numerous kelp forests, shallow and deep reefs, sand flats and beautiful coves; tiny Garbage Cove is just one of them.

Like many of the coves in this extensive preserve it is bordered and often filled with thick lush kelp. There is no shortage of life on the reefs and in the kelp of Garbage Cove. Especially entertaining are the many large male sheephead. Rub or bang rocks together and they will zoom right on in — close. Sometimes you feel you might even be attacked! A big, fat-bodied, bulbous-headed fish — with protruding teeth — can be intimidating. But have fun with it, because they’re not out to get you. These encounters make for great photos. The adult male’s white chin makes for some challenging photo composition. Remember to get low and shoot up. You want to bring in the green or blue water behind to give a background for the black head to contrast against. Then expose for the chin so that it is not blown out. Get close! This should not be a problem with these aggressive oafs.

There are a lot of other reef fishes here among the kelp, all of exceptional size including big calicos, kelpfish, and an occasional huge black sea bass. On the reef are various types of gobies, nudibranchs and anemones. Cruising the kelp are bright orange garibaldi, opaleye, and halfmoons. And the fish are friendly, lacking the normal fear reflex of divers.

Look into the rock crevices for some big lobster and an occasional abalone. The size and quantity of these animals is no doubt a result of this cove’s decades-long status as a marine preserve.

Even with abundant marine life, the main event here is the caverns. Cut deep into the island are a pair of water-filled holes that beg to be explored. The water is shallow, only about 10-15 feet deep, and open to the surface at all times. The branch to the left penetrates completely through the point allowing in a beautiful dance of light. And if that is not enough, there is a side branch that is narrower, but still open, that loops back around to the main branch. While it can be easily explored just by snorkeling, try scuba so you can take in the full display of light. Just be careful, because this shallow spot can have a lot of surge. Carrying a few extra pounds of weight is a good idea.

So if you head off to Anacapa Island and end up at a dive site known as Garbage Cove, know that your dive will not be “trashed” but rather one of wonder.

Skill Level: All, but beware of thick kelp and surge near rocky caverns.

Conditions: Light currents in cove but moderate to strong at the points.