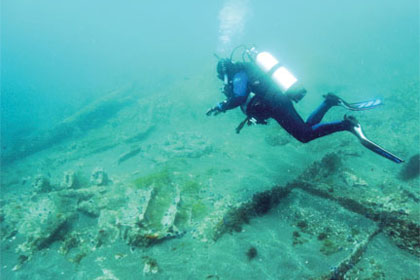 With most sunken wrecks it is fun to talk about illustrious careers of sailing from distant ports to wayward harbors and islands. Who were the mysterious personalities that walked the vessel’s decks over the years? What were their dreams? Were they famous, infamous or just no-bodies? In what spectacular way did the boat meet its demise?

Unfortunately, the wreck of the Equator on Anacapa Island lacks a remarkable story. Even its sinking was not particularly interesting.
The Equator was built in 1949 and sank later that same year. Constructed in Tacoma, Washington, the Equator plied her fishing trade along the Pacific Coast for just a few short months. After a successful fishing excursion she was heading back to San Pedro to unload a catch of frozen fish. Under circumstances that never became clear, she sank after striking a rock 150 yards from shore near a small anchorage known as East Fish Camp on the seaward side of Middle Anacapa Island.
Being a nearly brand new vessel, and sinking in just 25 to 30 feet of water, she was a prime target for salvage. Almost immediately, explosives were used to open up the hull to retrieve the most valuable hardware including the nearly brand new, and expensive, diesel motor. At just short of 93 feet, the Equator was not particularly large. Even so, the hull and a good deal of machinery and other metal remained.
As a dive site, the location is in a constant state of change. While there is nearly always some hardware exposed, often sand will sweep in obscuring much of the wreckage. At other times, a thin kelp forest will make it difficult to spot. My first dive on the wreck all I found was a large brass valve and a few other small bits. But on my most recent dive the sand had cleared away and the kelp was gone. With the excellent visibility you could clearly see the outline of the hull and pipes, shafts and wheels marking the larger portions of the scattered debris.
Most of the metal wreckage is old steel and iron slowly corroding into brittle bits. Here and there, however, are brass chunks in a variety of sizes. The biggest I saw was a large valve about the size of a basketball. Brass is striking in that it corrodes at a much slower rate than iron or steel and the shifting sands and wave action keep pieces mostly clean of marine growth. While some show the sighs of green tarnish (typical of copper and copper alloys), most have a beautiful luster.
This site is a protected archeological site like all of the wrecks in California waters (especially those within National Parks, as this is). Disturbing or taking from this wreck would mean a hefty fine and likely jail time.
Being a smallish wreck in shallow water, most divers will have plenty of bottom time remaining after exploring the area. In the invertebrate department you might find a nudibranch or two as well as sea hares. Fish include bright orange garibaldi and subdued cream-colored small ghost gobies.
Better marine life hunting lies on the nearby rocky reefs. Feather duster and Christmas tree worms dot the reefs as do a variety of colorful anemones. Ghost gobies like to perch themselves on the orange puffball sponges looking for a bit of food to float by in the surge.
Speaking of surge, because this is a shallow dive, it can be an issue. The wreck is a bit protected by a nearby ridge reef but as you venture out onto the shallow sand and nearby reefs expect to get pushed around a bit. Fortunately there is even more fun in deeper water.
Patch rocky reefs extend out away from the cliff face into water as deep as 40 feet. Sometimes kelp grows on these rocks, other times no. A larger variety of fish are present including painted greenlings, perch, young sheephead, small calico bass, and opaleye. Big sheep crab hunker down in the recesses of the reef.
Out here I like to venture onto the sand. You’ll see juvenile halibut and sole carefully camouflaged in the sand. Sea pens pop out from the sand. Sand stars make their way across the bottom and a keen eye will locate lavender sea pansies that are usually heavily dusted in the grit. Circling back around and cruising through a small kelp patch we took a heading back to the anchor that the charter boat skipper had so carefully dropped just to the side of the wreck. One more look around the Equator and we headed up.
Even obscure wrecks without fame and luster can make a special spot in my heart as a place that is an excellent dive. The Equator wreck made it to that spot.
At-A-Glance
Skill Level: All
Location: GPS N34°00.398, W119°23.059′. Just east of East Fish Camp anchorage on the seaward side of Middle Anacapa Island.
Access: Boat only. Several charter boats leave from Ventura and Santa Barbara.
Depth Range: 15 to 40 feet
Conditions: Good to excellent.
Visibility: Very good, averaging 25 to 50 feet.
Photography: Fair. Good wide-angle on wreckage when clear.
Hunting: It is legal to hunt here but there is nothing here to hunt.
Cautions: Surge.
Restrictions: Do not take, touch, or disturb any items on the wreck.
← Previous Post
Next Post →