Sutil Pass is a narrow pinch point between two land masses—Santa Barbara Island proper and the large rock Sutil Island. Only about 600 yards separate the shorelines but the water underneath holds reefs, kelp and abundance of marine life. The pinch point is a short-cut for marine life heading around the island and there is a lot of traffic. Like much of Santa Barbara Island, you can’t help but notice the barking of sea lions ashore. While the sea lions are not as numerous here […]

It is halibut hunting time again and dive shops buzz with where the hot spots are for the big “flatties.” The halibut are already running and it looks to be a good season. There are going to be a lot of good spots this year, but the north side of Santa Barbara Island, around Shag Rock, is likely to be a good location as it so often is. Shag Rock is a large islet 200 yards off the north side of Santa Barbara Island. Nearby, […]

I don’t know why Sutil is called an island because this popular dive site about 700 yards off Santa Barbara Island looks more like a large, triangular rock. Rising some 300 feet above the ocean’s surface, its steep sides are pocked with caves. The north side of Sutil is subject to swells and is dived infrequently. The west side is subject to swift currents that could sweep you out to sea and is never dived (at least not by charter boat). Thus, most of the […]

“But it’s just a bunch of sand!!!” That’s the most common complaint that we hear when we’ve done a dive in the Rookery. But that comment comes from people who haven’t explored the full potential of the place. The Rookery IS a sandy area located on the SE corner of Santa Barabra Island, and it’s the place where we get the highest concentration of California Sea Lions. They dot the shoreline, frequently with their pups, and they use this area of the island to navigate, […]

Santa Barbara Island (SBI) has an awful lot going for it. It’s got sea lions (obviously—and probably its best-known feature) but it’s also jam-packed with great dive sites all around its perimeter. One of my personal favorites is called Black Cavern. Now let’s understand from the git-go that this is a somewhat advanced dive as it involves depth and an overhead environment. So this is probably not a site you want to try fresh out of your Open Water class. But that doesn’t mean once […] 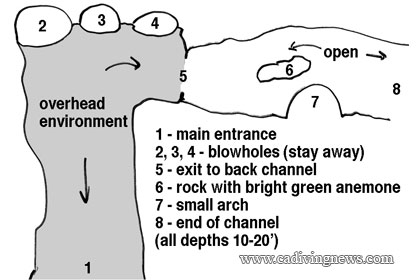 I have to start with a confession: I stole this cave years ago from Jerry Shapiro who owned the Bold Contender (which is now the Pacific Star). On a trip to Santa Barbara, Jerry told us he’d found this shallow tunnel and would we like to dive it? We said, “Sure,” and I was entranced. When we asked what it was called, Jerry said, “If you like it, it’s called Jerry’s Cave. If you don’t like it, it’s called Ken’s Cave.” When I came back, […]