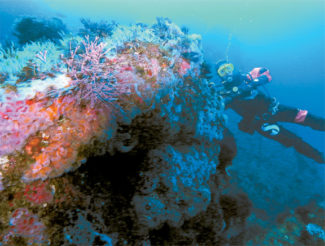 Visiting remote dive sites can be challenging due to weather and sea conditions, but we often find that the more remote the site, the more rewarding the adventure in terms of underwater visibility and abundance of marine life. Well-known southern California examples of such locations include Farnsworth Bank, Begg Rock, Cortez Bank, and Wilsons Rock. Distance from shore and “sporting” sea conditions make them less frequented by divers. Egg Rock is almost unheard of among diving circles. It sits nearly smack-dab in the middle of […]

A native Chicagoan, it wasn’t until I became a scuba diver that I discovered Santa Catalina isn’t the only island off the SoCal coast; it is one of eight. In the past 40 years I have explored all of them. Each is unique above and below the water and each offers hundreds of dive sites, no two alike. Five of the eight comprise the Channel Islands National Park and Marine Sanctuary. This article is about four: Anacapa, Santa Cruz, Santa Rosa and San Miguel. The […] 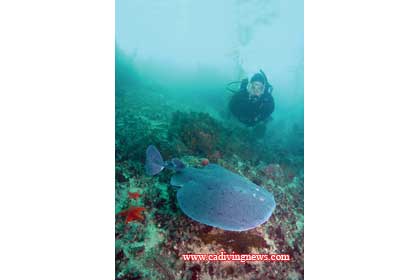 San Miguel Island is the most mysterious of all the eight Channel Islands. When not shrouded in clouds and fog and buffeted by strong bone-chilling prevailing northwest winds, Miguel appears like not much more than a sandy hump from a distance, quite stark in appearance. Underwater is a whole other story…Beneath the thick kelp canopies are bright colors to dazzle the eyes and keep cameras clicking. The furthest west of all the Channel Islands, it is brushed by much colder currents than its cousin islands […]

San Miguel Island is the sixth largest of the eight Channel Islands, just 14 square miles in area. It is also the westernmost. Because of the way the mainland juts out into the Pacific Ocean, however, it isn’t the farthest from the coast, San Nicolas Island is. Miguel is 26 miles south of Point Conception and 55 miles west of Ventura. From Santa Barbara, the island is about a four-hour dive boat run; from Ventura, about five hours. San Miguel is one of the five […]

We photographers often have a dilemma when choosing between challenging dives and relaxing dives. Challenging dives often offer up superb subjects, but depths and currents can limit bottom time and opportunities for creativity. Relaxing dives offer more time to be creative, but with harder to find subjects. Nirvana is to find abundant, colorful marine life in calm, shallow water. Nirvana is Lover’s Cove. Lover’s Cove sits in the shadow of Harris Point at the extreme tip of San Miguel Island. This is a relatively remote […]

It’s no wonder I love diving on mountains in the sea. I love earthly mountains. For fun, if I’m not diving I’m knocking about the Sierra Nevada. While I’m not a mountain climber, I do enjoy gazing at them and enjoy communing with the beautiful nature that lies at their bases and on the slopes. With diving, there are some very famous spots around the Channel Islands that make mountain diving worthwhile — but with these mountains you don’t climb, you start at the top […]

It was one of those days when you could not help feeling lucky. The sun was out, seas were flat, and there was barely enough wind to make a ripple on the water. This was one of those rare days at San Miguel where we could dive anywhere we wished. Captain Don of the Truth wisely choose to take us to Point Bennett. San Miguel is one of the Northern Channel Islands. Although it is not the largest, it has the notoriety of being the […]

Divers have a natural affinity to walls. Perhaps it is due to the falling sensation we get when we peer over the edge? Perhaps it is the flying sensation we get while cruising along a deep wall? But I bet it’s mostly the interesting and abundant marine critters that call the wall home. One of the most spectacular walls in Southern California is known as Wycoff Ledge. Wycoff Ledge is located on the south side of San Miguel Island. While San Miguel is one of […]

Very few have had the opportunity to dive Foul Area off the northwest end of San Miguel Island. Those who have, come back with tales of extraordinary sized lingcod, halibut and lobster. This is California underwater wilderness at its best. The Foul Area off Point Bennett is a large shallow reef area fraught with dangerous shallow reefs and racked by heavy seas most of the year. While this sounds like a horrible combination for diving, it keeps most visitors away for much of the year, […]

My suit compressed on the descent, and I compensated for the increasing negative buoyancy with gentle puffs into my BCD. “Touchdown,” I exclaimed in my own brain as my gloved fingers landed on the rock that formed the foundation of massive Richardson’s Rock. Not only had we managed to reach this outpost of outposts on the calmest day of the year, we had also pulled off diving both Wilson’s Rock and Richardson’s Rock on the same dive trip. Life is good. As I moved along […]