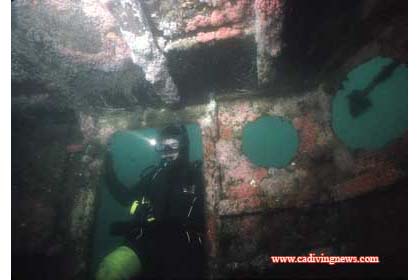 Although it was all planned out, the actual process was a bit comical. Slated to be the second edition to the now famous “Wreck Alley” off San Diego, the Ruby E just refused to sink. It was figured with all the valves open she would succumb to the sea about mid-day and divers would be on her by late afternoon. But as the afternoon wore on and shadows lengthened, it was becoming obvious it was going to take more. Project coordinator Al Bruton, then a San Diego lifeguard, had pumps brought in to hasten the ship’s fall to the bottom. I found out later the normal function of these pumps was to prevent vessels from sinking, not to provoke their demise. Al Bruton personally supervised the placement of the hoses on the Ruby E and you could see him from a distance hopping from place to place on the deck directing the flow of water. The Ruby began to creak and the stern suddenly began to dip. Somebody shouted to Al to get off the Ruby and you could see him hastily beat a retreat from the ship by diving into the water and swimming to a nearby boat. Safely onboard, the other boats backed away as the Ruby E went down stern first. Her butt hit bottom with a shutter as the bow stood high in the air. She paused. Everybody held their breath. With cheers from the crowds on surrounding boats, she slowly settled to the sea floor, her final resting place with a new purpose as a divers’ playground and haven to marine life.

Since her sinking July 18, 1989, the Ruby has far exceeded everybody’s expectations on just how much fun she would be. Tens of thousands of divers have explored her and many come back time and time again to enjoy her transformation to a living reef. Since the time of her sinking other editions have been made to Wreck Alley but for many this is the true attraction.
At 130 feet the former U.S. Coast Guard cutter can be explored in one dive. She sits nearly upright in 85 feet of water with the top of the wheelhouse about 50 feet down. Most of the wreck can be explored at 75 feet or less. For the most part this is an intermediate dive because of the depth. Although the hulk was opened up for diver penetration, leave interior exploration to the experienced and specially trained. The upper two decks of the wheelhouse could be easily penetrated, but over 20 years on the bottom have eaten away at the metal structure so much that it has becoming unstable. Avoid penetrating this area. Even so, this is a great place to peek inside. Bring a good dive light. For the trained diver (or those in a supervised class), there are various other penetration points, probably the most popular being the engine room where the two huge engine blocks were left in place.
As you drop down on the wreck the first thing you notice is the patchwork of beautiful corynactis anemones. These small creatures, each about the size of your little finger, form carpets of pink, orange, red and lavender. Much of the wreck is covered with them. Another kind of anemone to look for is the white Metridium senile on the bow. They come and go but when they are there they stand in stark contrast to the dark hulk covered with warm hued corynactis.
It is tempting to make a tour all the way around the ship, but take some time to just settle down and watch the fish. There are a lot of small and medium-sized reef fish to photograph or just observe. Look for the cabezons on the bow and scorpionfish toward the stern. Other reef fish in residence include island kelpfish, painting greenlings and a variety of gobies. Some time ago a juvenile wolf eel was reported, a highly unusual sighting. Keep your eyes open. Buzzing around the structure are blacksmith, perch, kelp bass, an occasional small sheephead and barred sand bass.
This is a good nudibranch dive. There are not a lot but what there is come in a variety of shapes, sizes and species.
Although the Ruby E is beginning to show signs of her age, she is growing old gracefully and with beauty. Will she begin to crumble soon?  All good things must come to an end but for now and the foreseeable future the Ruby E will continue to bring divers joy and fun.
Location: Approximately 2 miles off the Mission Beach Jetty. GPS N32°46.035′, W117°16.612. Usually marked with a buoy but sometimes it is missing.
Skill Level: Intermediate or better. Good for classes.
Snorkeling: None; too deep.
Depths: 85 feet to bottom; 50 feet to top. Average dive depth 75 feet.
Visibility: Variable but usually good. Averages 15 to 25 feet.
Photography: Good macro of anemones and small critters on wreck. Wide-angle good of divers exploring wreck on days of good viz.
Hunting: Discouraged on wreck.
Hazards: Leave penetration to experienced. Hatches on main deck lead to very dark holds.
← Previous Post
Next Post →