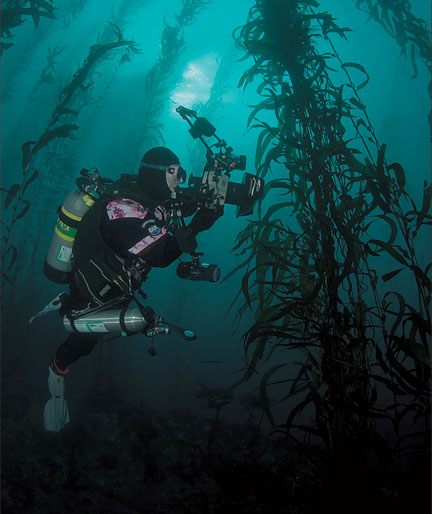 When divers board boats in Monterey Bay, most expect to dive in Carmel Bay, and many hope to go south of Point Lobos. It is not that the diving is always better farther south, and often is not, but they expect to head south. Sometimes you do not need to go very far south of Point Lobos to both meet expectations and find superior diving. Gibson Beach is a fine example of a dive site that proves this point.

Gibson Beach, along with the adjacent creek and canyon were named after George Martin Gibson, a transplant from Ohio who logged the canyon during the mid 1800s. Ironically, the creek and canyon were once named “Redwood” but after all of the trees were cut down they renamed these features after the lumberman.

The Gibson Beach dive site is located just south of, and adjacent to, the Point Lobos State Reserve. A large stone house on the south end of Gibson Beach marks the southern boundary of the reserve. Divers should be aware that this site is located right next to the forbidden area of the reserve. Even divers entering through the reserve with permits cannot dive in the forbidden area. Considering this, divers should anchor their boats just south of the large stone house, and should explore the reef south and offshore of the anchorage.

Boats normally anchor in 40 to 60 feet of water to give divers access to both the shallower and deeper parts of the reef. This anchorage is well protected from the northwesterly wind and swell by the massive Point Lobos. The bottom at the anchorage is mostly rock with a bit of sand between massive rock formations. These provide the foundation for a massive and healthy kelp bed.

The waters surrounding Point Lobos have been protected longer than any other reef in California. The area was first designated as a reserve in 1973, and then expanded in 2007 to include the area from Monastery Beach in the north to Mal Paso Creek in the south, and now includes Gibson Beach.

We all know that reserves are home to more fish life than areas where hunting is allowed. So, it should not be a surprise that the first thing you will notice here is the overwhelming abundance of fishes. They are everywhere. Thick schools of blue rockfish move among the kelp in shallow water. Big, fat vermilion rockfish, lingcod, and cabezon are found among the jumble of boulders. Game fish at Gibson Beach appear to know they are in a reserve and will politely pose for photographs.

Offshore there are a series of rock fingers that originate near the shore and run parallel out into 90 to 100 feet of water. The sides of these fingers are vertical walls and are adorned with an assortment of colorful invertebrate life. The scale of this reef is so overwhelming that you will need to take a little effort to notice the reef’s smaller inhabitants. Orange and yellow sponges cover some areas, while huge fish-eating anemones form a monopoly in other locations. In deeper water large Metridium anemones dot the rocky walls and sift the water for plankton.

Boats may also anchor a bit farther south of the stone house. There is a flat area in 50 to 60 feet of water just offshore of a substantial reef. The flats hold little interest for divers, but as you swim inshore the bottom juts up in a massive wall covered with every kind of invertebrate found in Central California — sponges, anemones, tunicates, lots of nudibranchs, and the list goes on. There is color everywhere. You will also find critters common to southern California — like chestnut cowries.

The granite reef is honeycombed with valleys and canyons. These are a lot of fun to explore and to photograph. Some go through the rock; others dead-end in little caves and alcoves. Oh, yes, there are a lot of fishes here as well.

Reserves are giant nurseries for marine life, and this one has been around for so long that the marine has had plenty of time to flourish. So, if you are looking for a site with rugged bottom topography along with an abundance of marine life, you can do no better than Gibson Beach.

Entry and Exit: Only boat access. No one may enter the water from Gibson Beach, which is part of Point Lobos State Reserve.

Photography: Great opportunities for both wide-angle and macro photography, especially for game fish and nudibranchs.

Hunting: This site is within the Point Lobos State Marine Reserve and no marine life may be taken.