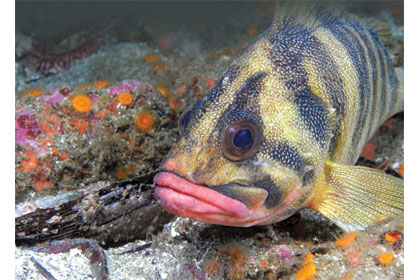 I’ve got great news for wall diving enthusiasts. At Santa Cruz Island’s Ruby Rock there are several walls to explore. One wall in particular drops vertically from the surface to nearly 110 feet. The tallest is on the western point of the cove. A smaller 50-foot wall is located on the east side. The walls at both locations feature lots of crevices and hiding places for a variety of marine animals.

Anemones provide a lot of the color here. Corynactis anemones are the tiniest, but when you pack thousands of them together along the rock face, they create the marine equivalent of a colorful crazy patchwork quilt along portions of the rock face. Here and there are fist-sized white spotted rose anemones. A personal favorite of many divers is the giant green anemone. At six inches across and as much as a foot tall, these robust creatures make great photo subjects.
Another colorful invertebrate here is the red gorgonian. Some of these “bushes” are quite large reaching up as much as three feet. They are similar to soft coral and as such are not plants but actually animals that extend their polyps to catch bits of food that drift by in the water column. With their white polyps open, red gorgonian actually appear pink underwater. This makes for striking photos against the green water.
Other filter feeders here are white and red sea cucumbers. At night thousands of the finger-sized creatures extend their plumes of filter feeding tentacles giving the shallower reef a shag carpet appearance. Hover over them for a while and you’ll be amazed by the fascinating way they dine; each sea cucumber collects microscopic particles on its fuzzy arms and then shoves the entire arm in its mouth, pulling it out clean. Then it repeats the process again and again throughout the night.
It is hard to believe that soft and squishy sea cucumbers are in the same animal grouping with spiny sea urchins: Echinodermata. Red urchins found in the rubble at the base of the shallow portions of the walls are a culinary delicacy. You’ll find urchin roe listed as uni on the menu at sushi restaurants. With a valid California fishing license you can take up to 35 per day year-round (outside of reserves, of course). As always, check on the California Fish and Wildlife website (www.dfg.ca.gov/marine/oceansportregs.asp) for complete, detailed, and up to date regulations. To prep carefully remove the mouth on the underside with a sharp knife. Rinse the inside. Reach inside with your finger to gently scrap the roe free and shake it out the bottom. Gently rinse again, discarding the dark bits from the creamy orange roe and enjoy.
Other seafood opportunities are limited. There are a few short lobsters inside the cove, some small rock scallops not worth bothering for and some medium-sized sheephead swimming over the reefs. Probably your best bet is spearfishing for halibut on the sand flats in the middle of the cove.
This is not a particularly fishy dive with one exception: rockfish. They are small but numerous and diverse in species. Blue rockfish will pass through in schools, sometimes settling to the bottom rocks for rest. Look under crevices for the yellow and black stripe treefish. At night or properly illuminated by camera strobes or lights their lips exhibit a beautiful deep red color. Other rockfish include olive, kelp, China, and gopher rockfishes.
Toward the center of the cove is a cave. Keep out. With surge swirling in the confined environment the risk of getting bashed about or trapped is too great. Another hazard in the cavern is the potential of encountering not playful sea lions but rather aggressive ones. In the cove divers sometimes peak the curiosity of the harbor seals that call this spot home.
Sea caves are abundant along this section of the island. Other dive spots with sea caves in the vicinity include Del Mar Cave, Three Caves, and Painted Grotto. Although not a dive site nearby Painted Cave is a fascinating geological feature considered one of the largest sea caves in the world. The name reference to the cave being “painted” does not refer to a human creative hand but rather the lichen, algae, and mineral seepage that give this colorful illusion. Painted Cave is so huge that in the hands of a skilled skipper an entire full-sized dive charter boat can be steered deep into the gaping hole. With a skiff or kayak an intrepid explorer can penetrate the island nearly a quarter-mile. If conditions allow, many dive charter boats will often give you the treat of a journey into the cave.
You’ll find Ruby Rock on the mainland side of the west end of Santa Cruz Island in the Channel Islands. The rock itself is the edifice at the eastern point. The cove offers calm waters often when other spots are blown out. If the south swell or wind is blowing, you’ll find excellent protection here. Northwest weather can churn things up but this site is not as bad as others in the area. Currents are common, especially off the points so use caution.
Whoever said that California is lacking spectacular wall dives has not been to Ruby Rock. At this location you’ll not only get the fun of a vertical reef but all the great critters that go with it.
At-A-Glance
Location: Approximately 2 miles east of West Point on the mainland side of Santa Cruz Island. GPS N34°04.443′, W119°53.573′ (GPS coordinates for mapping purposes only.)
Skill Level: Novice to intermediate.
Visibility: Good, averaging 30 to 40 feet.
Depths: 10 to 110 feet.
Snorkeling: Poor due to frequent surge.
Photography: Macro and wide angle.
Hunting: Spearfishing for occasional sheephead and halibut on the sand flats.
Hazards: Cave (do not enter). Surge and potentially strong currents.
← Previous Post
Next Post →