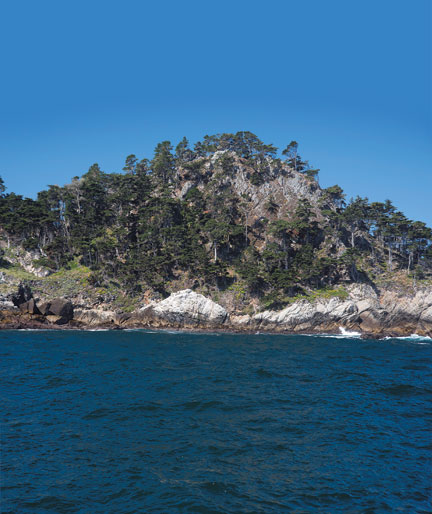 Divers, in general, are not aware of the colorful history of our most treasured dive sites. They come, dive, and depart without thinking about what happened in the past. Take Point Lobos, for example. In 1769 Point Lobos was named “Punta de los Lobos Marinos”, or Point of the Sea Wolves, by early Spanish explorers because of the large concentration of California sea lions that reside here. It was first a logging camp, then from the 1860s through the early 1890s a whaling port, an abalone harvesting spot and cannery from the1850s through the 1930s, and a stone quarry that provided the foundations for many of the forts in the San Francisco Bay Area. Many of its owners did not appreciate the extent of the area’s beauty and resources. Once, the land even changed hands during a card game!

Fortunately, the State of California identified Point Lobos as a special place that needed protection as early as 1933 when it joined the State Park System. In 1960, Point Lobos became the first underwater reserve in the nation when 750 submerged acres were added to the park. This occurred a full two years before the famed reefs at Pennecamp Coral Reef State Park in Florida received such protection. Today the reefs of Point Lobos are protected as a National Marine Sanctuary, a California State Marine Reserve, and a State Natural Preserve. While there are many great places to dive around Point Lobos, Bluefish Cove is one of the most fascinating. The cove is named for the huge schools of blue rockfish that are normally found here.

This cove is relatively protected from the predictable, northwesterly swell, not as protected as Whalers Cove, but more so than most of the rest of the reserve. Boats should anchor in the center of the cove. Here you will find a rock and sand bottom at 60 to 65 feet deep.

The deeper “bowl” of the cove is the least interesting for divers. There are lots of purple urchins, a large number of huge fish-eating anemones and a few fish. Better diving and more interesting invertebrate life may be found in the shallow rocky ridge to the southwest.

Rocks that make up the shallow reef are covered with spiny brittle stars. These are among the more interesting and photogenic of the echinoderms. They have a relatively small body with five long, spindly and prehensile arms covered with prominent, erect spines. These sea stars are conspicuously colored in reds, oranges, yellows, blues and purples. Like snowflakes, no two seem to be identical. I have great fun photographing the intricate colors, patterns and textures of these fascinating invertebrates.

When observed from a distance the rocks appear as a writhing, squirming mass with flashes of reds, oranges and yellows. They may live in a mat an inch or so thick, or be solitary and widely dispersed. This day they were found mostly in a single layer, but there had to be many millions of them.

Brittle stars must have the most adaptable feeding habits on our California reefs. They can graze on algae, scavenge on carrion, and actively feed on tasty bits floating by in the water column. A mucus coating they excrete on their arm spines is very effective at trapping plankton. They then use another prehensile arm to wrap around a plankton-covered arm, scrape the mucous into a ball, and present the morsel to its mouth.

Other than the brittle stars there was a lot of diversity on the reef. There were numerous purple sea urchins, sea cucumbers, sheep crabs, and colorful sponges. In one image I captured a cornucopia of marine life — many bryozoans, a hairy triton, a tunicate and a hermit crab, all in about a two inch field-of-view.

There were, however, only two tiny little beds of giant kelp, lots more urchins than in past years, and very few fish. We saw few pile perch and only one vermillion rockfish. There was one large and a few small blue rockfish, and a few other rockfish hunkered down in the nooks-and-crannies of the rock walls. The dynamics of this reef are fascinating since pile surfperch, sheep crabs and hairy tritons are particularly fond of eating brittle stars, and are more abundant now than in past years.

Location: In Point Lobos State Reserve, around the corner to the left from Whalers Cove.

Access: Divers must enter the reserve through the main gate and check in. The reservation system and rules may be found at pt-lobos.parks.state.ca.us/DiveReservations.htm.

Entry and Exit: Divers may only enter the water at the boat ramp in Whalers Cove. It’s a long swim around the corner to Bluefish Cove, and a boat or kayak is normally required.

Photography: Great opportunities for both wide-angle and macro photography.