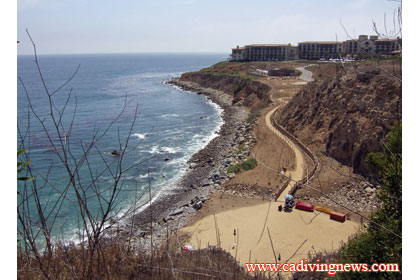 I have some wonderful memories of visiting Marineland of the Pacific: Bubbles the pilot whale, Orky and Corky, Baja Reef… but my favorite memories came after the park closed in 1987. For a few years I seemed to have the place all to myself. Sea lions hauled out on the rocks at the point. A mating pair of barn owls would perch on an abandoned light post each morning. Around 1989-90 word got out that the public access was still open. It didn’t take long before many more divers came to love the old place.

The two main entry points, Long Point and Marineland Cove require experience, skill and some luck entering over the slippery boulders and constantly changing cobble beach. A favorite entry point can be washed away with the next high tide. Watch the sets of waves. Small steps are required to enter and exit the water to avoid falls.

On the west side of the cove is The Garden. A gently sloping rocky reef gives way to sandy plains in depths of 20-30 feet. The reef is home to a healthy kelp forest with the usual reef inhabitants including garibaldi, octopus, Christmas tree and serpulid worms, sea urchins and anemones. The Garden is a nice spot to spend a few minutes decompressing at the end of a dive, as well as a beautiful reef for shallow scuba or free diving.

A large reef bordering the east side of the cove is known as the 120 Reef, named for the heading from the cove. Many divers choose to dive here due to the relatively short swim and large reef to explore. Sponges, kelp, sheephead and sunflower stars can be found in the crevices along the rocky reef. Feather duster worms provide color to the tops of the rocks, while garibaldi dash through the thick kelp.

A dive over the deep sandy plain offers the opportunity to find unusual animals. Beginning in 45 feet you can find mantis shrimp, globe crabs, sea pens, an occasional torpedo ray and other surprises. I’ve had a giant sea bass swim within an arm’s reach, and have also had a bull sea lion attack me and bite my elbow. A deep-water canyon comes close to Long Point and pelagic animals such as salps and jellies can occur here.

The best diving is at Long Point. Entry can be made on calm days from the point or you can enter from the cove and make the quarter-mile swim to the point. At 60-70 feet, pinnacles rising 15-20 feet from the bottom are found along the perimeter of the reef. Anemones, gorgonians, sponges, hydroids, rock scallops, tunicates, algae and bryozoans cover the surface of the rocks, while rockfish, sheephead and blacksmith swarm the edges. The Point offers a variety of nudibranchs not found at other southern California dive sites.

Beach access has been greatly improved at Terranea Resort. Graded trails lead to the cove and point. A fresh water shower and restrooms are available to the public. There are picnic tables at the snack bar, located midway between the dive sites. There are bicycle and kayak rentals onsite and hiking trails along the coastline. If you have not been to Terranea, you are in for a treat. For more information on the resort, visit www.terranea.com online.

What was once a world-class aquarium and theme park, later becoming an eyesore of abandoned buildings and graffiti has become a gem on the Palos Verdes Peninsula. The magic of Marineland lives on. It may be Terranea Resort on the hillside, but once you gaze under the surface, Marineland still beckons.