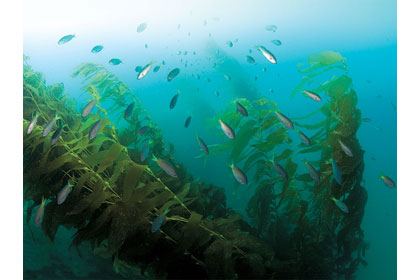 Artificial reefs are nothing new to Southern California, but the Wheeler North Reef in San Clemente raises the bar in terms of its size and scope.

Named after Wheeler J. North, a noted marine biologist who studied California’s coastal kelp forests, its creation stems from a 1989 Marine Review Committee report that found the cloudy water discharged by the San Onofre Nuclear Generating Station’s (SONGS) cooling system drifted south, blocked sunlight from a natural kelp bed and damaged about 180 acres of the habitat.
As a result, the California Coastal Commission required SONGS owner-operator Southern California Edison (SCE) to correct the environmental impacts, one of which was to build an artificial reef to replace the kelp beds. SCE earmarked more than $40 million as part of its agreement with the Coastal Commission.
Approximately 125,000 tons of boulder-sized quarry rocks were deposited in 18 polygons that vary in area from 1.35 to 38.8 acres. They were specifically designed to anchor a swaying kelp forest; the rocks provide the hard surface that kelp needs to flourish in.
Since it was completed in 2008, the reef has attracted a variety of marine species.
“There are over 200 species of algae, fish and invertebrates on the reef,” said Dan Reed, a biologist at the Marine Science Institute, University of California Santa Barbara. “Several highly valued species such as the California spiny lobster, halibut and giant sea bass are commonly observed there.”
With a total area of 177 acres, according to the latest survey, it is the largest man-made reef in the United States and one of the largest in the world, Reed adds.
UC Santa Barbara is monitoring its progress, which is measured based on 14 performance standards.
Unlike most artificial reefs, which are sometimes hastily built and evaluated, Reed said Wheeler was “strategically engineered to meet a suite of physical and biological performance standards aimed at insuring that it compensates for the loss of kelp forest plants and animals caused by the operation of SONGS; it is being comprehensively studied on an annual basis over the long-term to insure that these standards are met.”
During April’s public workshop, UCSB representative reported the reef met 9 of 14 standards.
Located a little more than a half a mile offshore (0.07 miles) and outside of marine protected areas in depths ranging from 38-50 feet depending on location (inshore vs. offshore) and tide, Wheeler gives recreational divers an opportunity to see one of the mothers of all man-made reefs, and the marine life that now calls it home.
Best time to dive Wheeler? During the summer when there’s less swell action and run off from nearby San Mateo Creek to muck up visibility. Even so, summer brings dark red tides so bring extra light and pray for a bright sunny day.
At-A-Glance
Location: Encompasses 862 acres and extends 2.5 miles along the coast from San Mateo Point to just north of the San Clemente Pier; just more than a half a mile offshore (0.07 miles) and outside of marine protected areas.
Access: Launch your boat from the Dana Point Harbor www.danapointharbor.com
Diving Depths: Ranges from 38-50 feet depending on tidal conditions.
Skill: Novice to advanced.
Conditions: Varies; as with most southern California coastal sites summer and fall are typically best. During summer months, red tides occasionally limit visibility.
Visibility: 10 to 25 feet.
Hunting: Lobster and various native species.
Photography: Good site for macro photography; wide-angle as conditions allow.
← Previous Post
Next Post →