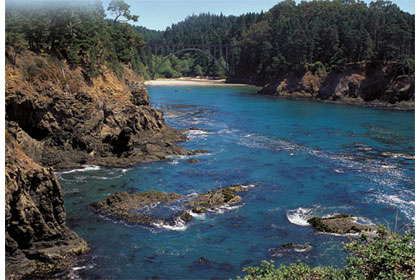 Most Californians believe that the United States acquired the land that would eventually become California as a result of a battle with Mexico. This is about half true, but at one point Russia claimed the northern part of the state, down to Bodega Bay. They erected a major stockade at Fort Ross in Sonoma County and used this a base to collect sea otter, elephant seal, and sea lion pelts.

The Russians sold their holdings in 1841 after hunting down the marine mammal population in the area. They left little to remember them by, with the exception of the fort, which was later restored, and some names on the map. One of these is Russian Gulch State Park. It is believed that U.S. government surveyors gave the name “Russian Gulch” to the land that would later become a State Park to honor these early explorers. There are also unsubstantiated claims that a Russian settled here after he deserted from Fort Ross, and that Russian fur hunters stored their pelts here.
Russian Gulch State Park offers two distinctly different diving experiences that will entertain both advanced and beginner divers. Divers may follow the road that passes beneath the bridge that traverses Russian Gulch, and to a sandy beach. The cove here is “W”-shaped and the gulch empties to the northern wing of the “W.” This entry is predictably easy and the majority of the cove is normally very calm.
The bottom near the entry is mostly gravel and silt with a few boulders. Depths range from 15 to 40 feet. Attached to the boulders are a few wisps of bull kelp and some abalones. There are few fish here, mainly small lingcod, rockfish and perch. Better diving may be found along the north side of the cove. This area is quite sheltered from the northwest wind and swell and is a very pleasant place to dive. Here one finds a rocky bottom with canyons and valleys. There is a fair population of abalone in 10 to 30 feet. There are no real monsters to be had, but a limit of 7 1/2 to 8 inchers may be plucked if you have some patience. This is a great spot for beginner abalone divers since there are a number of abalones in calm, shallow water.
When weather conditions are favorable, experienced abalone divers should hike to the north point of the cove, follow one of the well-worn paths down the 20-foot cliff face, and enter off the rocks. Directly off the entry is a rocky plateau, about 10 feet deep. Here divers will find an extraordinary number of abalone. There are no trophies here but most are over the 7-inch minimum size. Surrounding the shallows are a number of deep valleys and narrow channels, 20 to 30 feet deep. Some of these are only a few feet wide. The bottoms of these valleys are full of larger abalone, to about 9 inches.
The deep water just outside the cove is a good place to hunt for larger lingcod and rockfish. Divers sometimes find unusual rockfish here, like the quillback. Photographers will enjoy this area as well. Orange sea cucumbers give color to the rocky walls and surge channels along with large anemones and encrusting sponges. Those with a little patience will find a number of nudibranchs.
Just north of the entry on the north point of the cove is the Devil’s Punchbowl. This sinkhole is about 100 feet across and 60 feet deep. It was formed when waves carved a tunnel under the bluff and the roof collapsed. The sinkhole makes a reverberating echo when big waves pound the coastline at high tide.
On calm days great diving may be found along the southern half of the cove. This area is open to the northwest swell and can get ugly on rough days. Here the bottom is rugged with deep canyons winding throughout the area with vertical mini-walls that create a maze-like structure. Throughout the rocky maze are large numbers of abalone. Abalone here are both larger and more numerous than along the north wall.
Most divers come to Russian Gulch State Park for the abalone and fish. However, the topside and undersea scenery are worth the trip even if you are not a hunter. This park also has one of the best near-beach campsites in California.
At-A-Glance
Location: This State Park is located off Highway 1, about 3 miles north of the town of Mendocino at mile marker MEN 53.00.
Access and Facilities: Pay the entry fee at the park kiosk and follow the signs to reach a well-protected sand beach. Small inflatable boats and kayaks are easily launched here. More rugged rocky-beach entries may be found by taking a right turn to the well-marked picnic area. Park in the paved lot and hike down the trail. Divers can avoid the entry fee and dive the south cove by turning west onto County Road 500D just south of Russian Gulch at mile marker MEN 52.00. Follow the road to the end and park. There is a steep trail to the water. Bring a rope. A campground and toilets are located here.
Depth: 10-60 feet.
Visibility: 10 to 20 feet within the cove, 10 to 40 feet outside.
Skill Level: Beginner within the cove, advanced for rocky point entries.
Hunting: Good to excellent abalone hunting throughout the area, good spearfishing near the mouth and outside the cove.
Photography: Good macro photography along the southern portion of the cove for invertebrates, good wide-angle photography outside the cove on days of good visibility.
Hazards: Watch for surge, big waves, and thick kelp.
← Previous Post
Next Post →