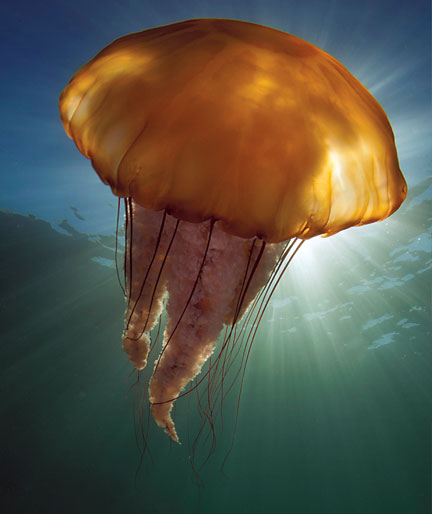 Skill Level: Intermediate or better on most days. Novice divers can enjoy Coral Street on calm days. Since conditions can change rapidly, novices should be accompanied by more experienced divers.

Location: At the intersection of Coral Street and Ocean View Boulevard in Pacific Grove.

Access: Free parking is available right next to the entry. This is a good spot to launch kayaks to explore the offshore Chase Reef. A short set of stairs takes you to a gravel beach.

Facilities: None at the entry; there is a public restroom near-by at the golf course at Point Piños.

Entry and Exit: Enter off the gravel beach. This site is best dived at high tide to make it easier swimming past eelgrass and shallow boulders.

So what makes for a perfect beach dive? Parking close to the entry? Short swim to good diving? Lots of interesting critters? Calm entry? Maybe an uncrowded beach? If you answered yes to most of these questions you need look no further than Coral Street.

The Coral Street entry is located where Coral Street meets the Monterey Bay, so it’s no mystery how the site got its name. Coral is just one of many marine-inspired street names in Pacific Grove. Divers will find ample street parking about 30 feet from the entry, so it is an easy walk to the water.

The underwater terrain is similar to what you see on the beach—large granite boulders and rocks, with a bit of coarse sand in between. Coral Street is fairly shallow for 50 yards or so, and divers swim over eelgrass covered boulders to reach diving depths. Be sure to look down as you swim out, and you’ll likely see small fishes hiding in the eelgrass. We also found a number of relatively large, brown rock crabs with enormous claws.

Also, be sure to look ahead of you, and on the offshore rocks. A harbor seal is predictably found resting on the wash rock in the middle of the cove, and sea otters are often found hunting in the shallow, near shore boulders for rock crabs and abalone. There were a number of abalone shells, but no living abalones were observed. I guess the otters got to them first. Otters, unfortunately, are not particularly curious of divers, and are rarely seen underwater.

As you proceed offshore, the bottom consists of massive rocky ridges that run roughly parallel to shore. The reef is scored with deep cracks and fissures. In these hide crabs, shrimp, and juvenile fishes of several species. These ridges have largely, but not completely, been taken over by an army of purple sea urchins. In some areas the urchins were so numerous that they formed a layer three deep, in other areas there were relatively few.

Sea stars have been relatively absent from California’s reefs in recent years, but they seem to be making a strong comeback here. We observed many dozens of bat stars, and a dozen or so giant-spined stars. The bat stars seemed to be grazing on encrusting algae, while the giant-spined stars were voraciously dining on purple urchins. I, for one, cheered them forward as they took on the horde of purple urchins.

Despite the urchins there was a lot of life here. There was a huge number of nudibranchs, mostly several species of yellow-colored dorids. These were easy to spot as they moved across the purple encrusting algae. There was also a number of magenta tunicates, orange sea cucumbers, and colorful sponges. In August a fair number of jellyfish of many species were present but mostly moon jellies ands sea nettles.

Coral Street is a wonderful and easy dive on calm days, but it can be challenging in a bit of swell, since divers must swim across the shallows to get to deeper water. Having said that it is a great place to take divers who are new to Central California diving, as the area often has relatively clear water, and there is a lot to see in calm, shallow water. More advanced divers may be disappointed in this site since there is a notable absence of large fish and giant kelp, and urchins have pretty much taken over the deeper reefs that more advanced divers seek out. That said, it is still a very pleasant dive.