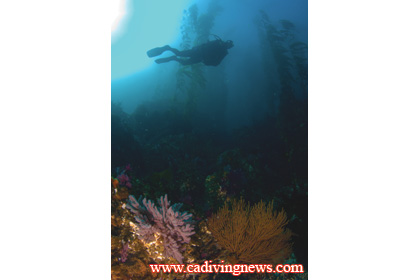 Part of what makes a wreck a good wreck to dive is a good story, and this wreck has one. In May of 1943 the United States was still at war. With Guadalcanal in U.S. hands for about three months, and with the final battle to eject the Japanese from U.S. territory in the Aleutians underway, the war in the Pacific was by no means decided.  So when a young Army Air Force flyer lifted his P-38 Lightning off from Coronado Island, he had a two-part mission: first, he completed his “dawn patrol” and then started practicing attacks with the two other aircraft in his formation near Torrey Pines State Beach.

As the three airplanes turned, skimming low over the surface, his right wing hit the surface of the water, damaging the prop. After recovering briefly and discovering damage on the other side of the aircraft as well, he changed his plan from limping home on one engine, to ditching in the ocean. He accomplished this and was on shore quickly, with only minor injuries.

But his plane sank almost immediately, heading down to 130 feet and hitting a sandy featureless bottom. Like any wreck in such a place, the P-38 today has become a busy crossroads for marine life, and a great little dive. Since it’s right at the edge of the recreational limit, it can be a challenging sport dive, or a nice beginning tech dive, depending on how you want to treat it. What makes the P-38 an advanced dive isn’t just the depth— it’s that the wreck is isolated from any other structure, and that it is a fragile wreck, small and primarily made out of aluminum.

All this makes anchoring the dive boat an issue; one misplaced anchor drop, and we would all have one less dive site. There are different approaches to this problem. Usually there is only a small weight on the bottom of the line near the wreck (placed there by a diver, not dropped) and then the hook is dropped up wind or up current and scope is given out until the dive boat sits over top of the wreck. This plan requires divers to descend and ascend in open water to 130’ with only a light line that cannot be touched. This is what the term “Advanced Diver” means for this particular dive.  I’ve also been on the wreck when another scheme was used successfully, but you really have to be patient and know what you are doing if you insist on diving with a down line that divers can grab, while still being careful not to impact the wreck.

Remember this is what all recreational agencies consider a deep dive, so you should have a secondary gas supply and a good light. Also an SMB to hang under for your deco is highly recommended. I like a little helium in the mix at that depth myself, to help me clearly absorb and remember details. Be sure to talk over recovery procedures with the boat crew to avoid long surface swims and, as always, the most important thing to bring along is a plan.

When you get there you will have a blast. There is always big fish, often an eel in the cockpit, and lots of vermilion rockfish, and so on. Take a good look at some P-38 photos before you go, so you can keep oriented. The unusual twin tail design and effects of 50 years underwater can make the aircraft layout a bit puzzling to the unprepared. The cockpit and engines, minus their aluminum heads, are easy to identify. Look for the remaining 50-caliber machine gun too, and please leave everything behind for the next diver.

Kudos need to go to Dave Miller for finding the wreck and the gang at California Wreck divers for firmly identifying it by matching the right engine’s “bureau number” to the accident report. Special thanks to Barbara Lloyd for sharing frames from her excellent video of the wreck.