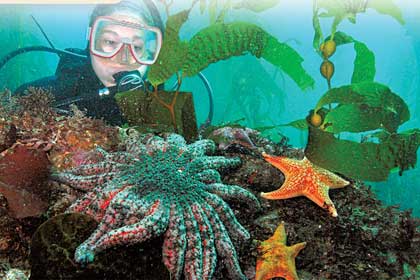 When it comes to color, divers visiting California reef communities enter a world decorated in a vibrant mix of hues. Santa Cruz Island’s Flame Reef provides a classic case in point — it’s literally on fire with bright colors. Rising sharply from the bottom and a good distance away from any run-off from the island’s landmass, Flame Reef is bathed in clear, life-giving currents that usually flow west to east and help maintain the water clarity. From some vantage points it appears as if the site is a well-manicured garden.

This garden’s eye-catching “flowering bushes” are actually impressive stands of golden and red gorgonian. The branches of these cnidarians extend into the water column where the polyps catch prey that consists mostly of microscopic organic particles that drift in the current. Despite bearing strong resemblance to some terrestrial plants, gorgonians are actually colonies of animals made up of thousands of tiny individual polyps. The whitish polyps of red gorgonians give the colony an overall pinkish appearance.
The mix of colorful fishes is headed by numerous pinkish hued female sheephead. Although larger than the females, the majority of the tri-color males are smaller than many male sheephead encountered at other sites. Perhaps the general paucity of larger males is due to the fact that the area is open to hunting and the reef is easily found.
Bright orange garibaldi are commonly encountered at Flame Reef, although not in the numbers they demonstrate at Anacapa and Catalina Islands to the south. Another touch of color is supplied by multitudes of golden señoritafish. These cigar-shaped wrasse are active cleaners, and they are often seen busily providing their services to a number of reef fishes. It usually doesn’t take long to find a brilliant red scorpionfish resting on the sea floor. Curious painted greenlings (aka convictfish) add yet another splash of color.
Even more color is added by the interesting variety of rockfishes. This grouping includes numerous treefish, a favorite subject for many photographers. Treefish exhibit a yellow and black striped body, and vivid pink-to-red lips. It is believed that these rockfish use their brightly colored lips when they display to other treefish in the effort to claim their plot of reef. Treefish are primarily nocturnal creatures, and their lips often seem even more richly colored when illuminated by a dive light. The vivid coloration is absent from the lips of the juveniles, but the body of a young treefish glows in an eye-catching combination of yellow broken up by at least six black stripes. The fins of the juveniles are also black, but they are tipped with white and iridescent blue markings. As a treefish grows older the vivid colors fade and the body of these reef huggers takes on more of an olive color.
Even when taking Flame Reef’s colorful fish populations into account, many experienced divers will likely tell you that it is the invertebrates that provide the most color. Stars dominate. The variety is outstanding with the subtle, cool hues of giant sunstars, and the contrasting colors of numerous leather, rainbow, blood, and bat stars on display.
Other invertebrates that you are almost guaranteed to find include red strawberry anemones and the creatures that are commonly known as corynactis anemones. Occurring in a wide variety of hues ranging from deep reds, oranges, pinks and yellows to near white, are not really anemones according to taxonomists. They are more accurately referred to as corallimorpharians, cnidarians that are close relatives of anemones.
The bottom topography at Flame Reef offers significant relief, and there are plenty of cracks and crevices to explore. The sea floor is a combination of sand and mud. Depending on your exact location you will usually find the deepest points on the bottom to be in the neighborhood of 65 feet below the surface. From the sea floor the reef rises sharply with numerous jumbled boulders and a few mini-walls highlighting the seascape. The reef tops out with a series of sharply peaked pinnacles that rise to within 40 feet or so of the surface. You’ll find some kelp, but the kelp bed is generally thin.
Flame Reef is not a particularly abundant hunting area. You can find an occasional lobster or rock scallop, but the opportunities for spearfishermen are limited with the exception of some large halibut that can sometimes be found in the sand surrounding the reef.
Santa Cruz Island is not generally noted for stellar water clarity, but Flame Reef is a noteworthy exception. Visibility is often quite good even when it is reduced along other parts of the island. The current is usually not too strong, but it has been known to come up suddenly. So, always be prepared with a current line trailing behind your dive boat. With a cast of so many colorful characters and relatively easy diving, it is easy to see why Flame Reef is a favorite California dive site for underwater photographers and sightseers alike.
Location: On the backside of the east end of Santa Cruz Island. West of Sandstone Point. GPS coordinates are N33°59.166′, W119°35.118′. (Use GPS coordinates for reference only and not as your sole source of navigation.)
Access: Boat only
Best Diving Depth: 40 to 70 feet
Skill: All
Visibility: Averages 40 feet
Hunting: Not especially productive. Does produce a few lobster and scallops, and some halibut in surrounding sand.
Photography:  Good macro with a variety of colorful subjects.
← Previous Post
Next Post →