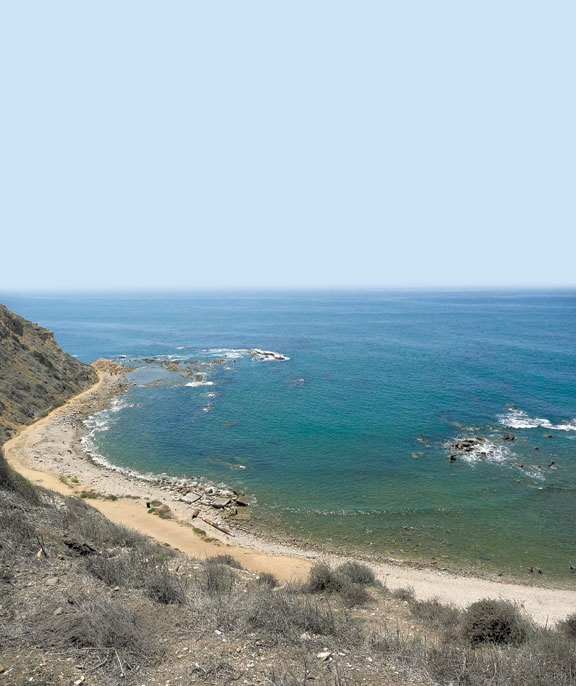 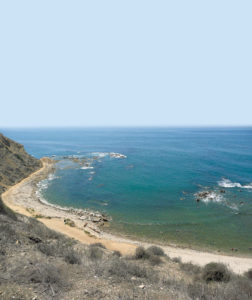 The Palos Verdes Peninsula at the Southern end of Los Angeles County can have some fantastic diving that often rivals that of the Channel Islands. Waters are generally clear, with abundant kelp and marine life, and there are even a few wrecks and an underwater arch or two.

Charter boats leave from San Pedro and Redondo Beach but only the six-pack boat Island Diver visits these sites regularly. Shore diving options are limited, requiring hikes down steep trails.
However, there is one location that allows you to drive right down to the water’s edge is at White Point; it is Royal Palms Beach.

Entrance to the road leading to the beach is at 1799 Paseo del Mar in San Pedro. Before you drive down the hill and pay the parking fee, stop and take advantage of the excellent view of the dive site from the cliff. This is a great way to check diving conditions and plan your dive. At the top of the cliff to the southeast (left of the gate as you face the ocean) is a small parking lot with parking meters. A few quarters should buy you enough time to overview the dive site.

As you look to the left you’ll see Issei Cove. White Point marks the southeastern perimeter of Issei Cove. It is not entirely clear how White Point got its name. Some say it is named after a sailor who jumped ship here, or it could be as simple as the paleness of the geological feature.

Issei Cove, on the other hand, has a lot of history. “Issei” means “first generation” in Japanese. Around the turn of the 20th century first generation Japanese-Americans were the primary group to occupy this area. They used it for two purposes. From this location they would launch boats with hard-hat divers to harvest abalone along the nearby coast. This was long before abalone was considered a delicacy, so it was in abundant supply.
The site was also popular with bathers who came to soak in the sulfur-infused hot water springs, which some regard as having healing properties. If you look closely you can still see remains of a health spa that once stood on the site.

Several things knocked this location out of its usefulness. First, abalone numbers declined, and then the Great Depression hit, followed by the Long Beach earthquake of 1933, which impacted the hot springs. Finally World War II and the Japanese-American internment camps caused the resort to shut down entirely. Surf and seas took their toll and the concrete pools were reduced to ruins.

Some hot water vents can be experienced from underwater. As you approach water’s edge at low tide you might even catch a whiff of sulfur. This demonstrates that these vents are still leaking warm water. But it is best to dive here at high tide on a calm day to experience this interesting geologic feature underwater.

Water entry and exit here are across a boulder or gravel beach. Find a spot that drops off into deep water quickly. The cove is somewhat protected from the seas, so finding an entry point is not difficult if conditions are right.

Water depth inside the cove averages less than 20 feet. It is near the mouth of the cove where you will find the most vents. You’ll notice white fungus near the vents and you’ll see rippling thermal waves as the warm water makes its way from the seafloor. The warm water doesn’t impact the overall temperature of the cove but it is fun to take your gloves off and run your hands through the heat.

A microbial mat surrounding the vents is fascinating. The microbes are formed not by photosynthesis, but by chemosynthesis, which is a chemical reaction. The warm water sustains the microbes on which the white fungus thrives. It is a simple but rare system usually found only in extremely deepwater locations.

Once you have warmed your hands in the vents it is time to head out to the kelp forests offshore. To the right of the cove is the best kelp forest but El Niño has taken its toll as of late so the kelp may be thin. A series of finger reefs extend out from the cove and to the right. Depths here are around 25 to 30 feet about 200 yards out.

There is also a smaller reef off White Point. While the reef here is not quite as interesting, take the time to check it out. The ferry Melrose ran aground here in 1932 in a 50-knot gale. Little of the wreck remains but a keen eye might spot bits of wreckage in 6 to 20 feet of water.

Although not as abundant as other Palos Verdes locations these reefs hold a good selection of animal life. Invertebrate life includes giant keyhole limpets, Pisaster stars, and golden gorgonian sea fans — the most durable of the gorgonians able to endure the onslaught of heavy surge. Other invertebrate reef critters you may spot here are small rock scallops, sheep crabs, Norris top snails, and shiny rich brown chestnut cowries — believed to be the only cowry on the west coast of North America. Finally, this is a good spot for nudibranchs, especially the bright orange and rich blue Spanish shawl.

Fish life is dependant on what the kelp forests look like. If kelp is present you’ll see small calico bass, opaleye, garibaldi, and a variety of perch along with some small sheephead. You will likely have better luck finding smaller reef fish, especially the painted greenling that seem to be especially abundant here.

There is a lot of good photo material but entering and exiting the water over the rocks with a large camera rig can be challenging on all but the best of days. Whether you are participating in photo endeavors or just sightseeing you can expect visibility that averages around 20 feet.

While there are no facilities on this end of the parking area the northeastern end has a pleasant palm tree shaded picnic area for a post-dive lunch. Restrooms can be also found here.

With the combination of unique underwater hot water vents, easy drive-up water access and the good diving that the Palos Verdes Peninsula has to offer, if you are an avid shore diver, White Point should be on your list of places to get wet.

Skill Level: Intermediate with beach diving experience.
Location: Entrance to the steep roadway to the beach is at 1799 Paseo del Mar, San Pedro near the intersection with Western Ave. in San Pedro. Issei Cove is on the southeast end of the park. White Point marks the southernmost portion of that cove.
Access: Park as close as possible to Issei Cove. Pay for parking at the kiosk. The cove is a few hundred yards from the parking area.
Entry and Exit: Cobble rock surf entry and exit. High tide entry and exit recommended.
Depth Range: To 10 to 30 feet.
Conditions: Cove offers some protection from the surf. Check surf ahead of time at surf-forecast.com.
Visibility: Averages 15 to 20 feet.
Photography: Good macro.

Fair wide-angle in the kelp.
Hunting: Little or none.

No lobster or sizeable fish.
Cautions: Challenging entry and exit. Some current.