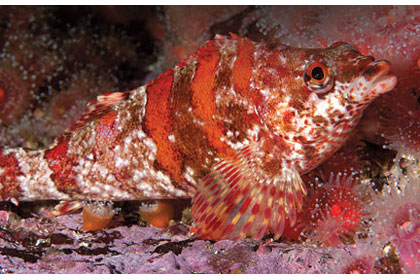 The greater Monterey Bay Area has a large number of “named” dive sites; and there is often an entertaining story that accompanies each name. Eric’s Pinnacle is a good example. Back in the 1990s Captain Phil Sammet and Eric Minard (Captain Dave Minard’s brother) were out looking for a sandy spot to hunt halibut. Phil was driving and Eric was watching the depth finder when they went over a steep-sided pinnacle. Eric exclaimed, “Wow, look at that!” Phil said, “You found it; what are you going to name it?” Eric responded, “Eric’s Pinnacle, dammit!” So the site is called either Eric’s Pinnacle or EPD.

Eric’s sits just beyond the kelp bed off of the Otter Cove entry in Pacific Grove. This massive pinnacle is shaped like a rugged mountain peak to some, while others liken it to a fairytale castle. The base of the pinnacle rests in 55 feet of water and the top is around 20 feet. It is steep sided with many side spires and deep cracks and fissures. The rock is split in several places and a giant fissure runs all the way through the pinnacle.
The pinnacle supports a tiny ponytail of giant kelp in late summer and autumn, but lacks kelp most of the year. The top and east side are covered with a thick carpet of strawberry anemones, sponges and other encrusting invertebrates. Cup corals cover much of the rock in other places.
This site is all about the pinnacle’s colorful cape of bright red strawberry anemones and its abundance of photogenic fish. On a recent dive we found a large number of greenlings. Painted greenlings rested on rocky ledges and waited for a tasty morsel to drift by in the mild current. There were a great many out and about and it was easy to find some sitting in colorful backgrounds. One particularly photogenic greenling chose to rest on a strawberry anemone-framed ledge and posed for several shots.
There were also a fair number of kelp greenlings. I find kelp greenlings particularly difficult to photograph since they have a nasty habit of darting off just as I frame the perfect shot. However, the kelp greenlings at Eric’s were quite willing to sit still for my large camera housing and blinding strobes.
The cracks are home to larger invertebrates and fish. With a light you will be able to see large rockfish hiding way back in the cracks. There was a very large and very old treefish in one of the larger cracks at the base of the rock. Large schools of blue rockfish are often found circling the rock.
It has it has been illegal for some time to take invertebrates here, and the residents have grown numerous and fat. We found several very handsome rock scallops tucked into one of the cracks.
A wolf eel is frequently found in one of the larger cracks on the side of the pinnacle. Look for a pile of shells in a heap at the base of the pinnacle, and follow the debris up to its lair. There was no wolf eel out on my last visit, but it is always a good idea to spend at least a little time looking for one.
Most divers spend most of their time exploring the main pinnacle, but it is worthwhile to explore the surrounding area. Here you will find large rocks and boulders on a relatively flat sand bottom. Look for large fish-eating anemones on the sides of the larger boulders, and fair-sized lingcod lying on the sand in between. In the sandy areas you might find a bat ray or sea otter digging for shellfish or fat innkeeper worms.
Eric’s Pinnacle is a calm and relaxing site with plenty of vertical rock to explore and lots of fish to watch and photograph. This “named” site attracts quite a few divers, and most consider it unethical to hunt here, so leave your spear gun home and bring your camera to enjoy the site’s rich fish life. Just because this is an easy site to dive it still can be exciting since you never know when a sea otter, bat ray, or guitarfish might swim by.
At-A-Glance
Skill Level: Beginner or better
Location: Offshore of Otter Cove in Pacific Grove at 36° 38.044′ N, 121° 55.101′ W.
Access: Boats may be launched from the public ramps at Monterey Breakwater or between Fisherman’s Wharf and Wharf #2.
Facilities: None
Entry and Exit: Only boat access
Depth Range: 20 to 55 feet
Conditions: Predictably very calm
Visibility: 10 to 30 feet
Photography: Great macro and fish photography even on days when the visibility to poor; good wide-angle photography when the visibility is better.
Hunting: This site is within the Pacific Grove Marine Gardens State Marine Conservation Area. Spearfishing is permitted, but discouraged; all invertebrates are protected.
Cautions: Watch for surge, and boat traffic.
← Previous Post
Next Post →