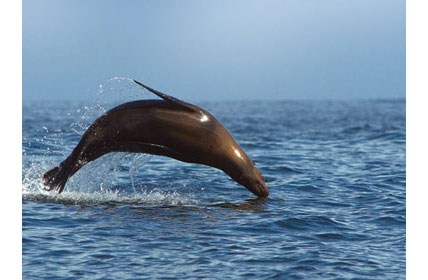 Not so very long ago there were only a handful of “named sites” offshore of the Monterey Peninsula. Today, with the advent of GPS and accurate bathometry charts many dozens of sites are now precisely mapped. Many of these sites were once collectively called Chase Reef. The name of this reef derives from the Chase family, whose philanthropy was honored by bestowing their name to one of Pacific Grove’s parks and this reef.

The entire Chase Reef has many great dive sites, and each has its own charm. However, the spot with the biggest, steepest wall is called Chase Wall. The most vertical portion of the wall stretches for about 25 yards and roughly parallel to shore. The high point is at about 30 feet and the deepest part around 45. This is not a single, intact wall, but one that is broken into many large, flat-faced rocks by deep cracks. The largest and most intact rocks are in the center of the reef, and the reef drops to a lower relief pile of rocks at both ends. Near the base of the wall the bottom is mostly sand with a scattering of large boulders.
To the west the inshore bottom slowly rises to the shore. Here is a pretty rock and sand patch reef beneath a thick canopy of giant kelp. To the east the bottom slowly drops away from about 45 feet to 60 feet to a mostly sand bottom with some rocks. The best diving is on the wall, and you can easily circumnavigate the site twice on a single tank.
The wall is covered with a healthy growth of invertebrates, including red strawberry anemones, red, orange and yellow sponges, and orange bryozoans. Large fish-eating anemones are conspicuous both by their bright red base and impressive size. Red and orange sea cucumbers hide among the rocks.
This is a good place to find nudibranchs, too. Most are dorids, and most of these are one of the yellow varieties. However, huge alabaster nudibranchs are also found here. Those with good eyes may also find aeolids like the horned nudibranch.
Chase Wall is a particularly good place for fish watching. During the winter months cabezons lay eggs, and the males guard them. This is a great time of year to get cabezon images since they are reluctant to leave their nests. One of cabezon’s favorite foods is baby abalone. They use their massive forehead to dislodge the abalone from a rock, and then swallow it whole. After the soft tissue is digested, the cabezon will spit out the shell. The nicely polished abalone shells that divers find are due to the cabezon’s digestive juices.
This is also a great place to photograph smaller fish species. Blackeye gobies hunt along the sand bottom, while snubnose and coralline sculpins hide in the nooks and crannies of the rock face. These are very photogenic with their red and orange adorned faces and charming projections around their eyes.
Common dolphins, Rizzo dolphins, and California sea lions frequently accompany divers on their way to Chase Reef. You may not see all of these each day, but is unusual not to see at least one of these species. At Chase Wall sea lions and harbor seals often visit divers while they are underwater. The seals are curious, particularly of those carrying spearguns. A great way to get close-up shots of harbor seals is to carry, but not use, a speargun. Harbor seals have practiced pulling fish off the tip of a diver’s spear, so they will hang close in anticipation of a free lunch.
Monterey Bay is such a magical place. The combination of healthy kelp beds, marine mammals, fish and colorful invertebrates keeps divers coming back dive after dive.
The author would like to thank Captain MaryJo Nelson and the crew of the Beachhopper II for their help in the preparation of this article.
At-A-Glance
Location: Along Chase Reef offshore of Pacific Grove. GPS coordinates 36°38.045′ N, 121°55.135′ W.
Access and Facilities: Boat dive only. Private boats may be launched from the public ramps at Monterey Breakwater or between Fisherman’s Wharf and Wharf #2.
Depth: 30 to 50 feet.
Visibility: 10 to 40 feet
Skill Level: Beginner or better.
Hunting: This site is within the Pacific Grove Marine Gardens State Marine Conservation Area. Take of invertebrates is prohibited. Spearfishing is permitted, but discouraged.
Photography: Great macro and wide-angle.
Hazards: Watch for thick kelp, surge, and boat traffic.
← Previous Post
Next Post →