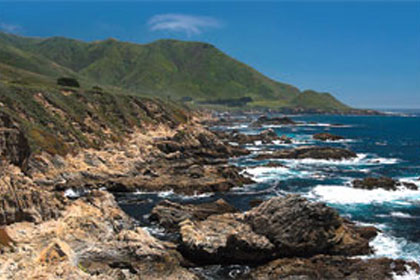 The Big Sur coastline stretches south of Malpaso Creek near Carmel to Ragged Point near the San Luis Obispo County Line. The dive sites here are wild, undeveloped, and offer some of the most pristine diving in the state. Access to most of these sites is extremely limited, as many of the shore-accessible sites require divers to be part mountain goat, and charter boat trips from Monterey or Santa Barbara are few and far between. The most accessible shore diving is found in an area about seven miles south of Carmel in Garrapata State Park.

The early Spanish explorers left their mark by naming many of the area’s prominent features. A tiny and relentless beast must have ravaged these early explorers since “garrapata” is Spanish for “tick.” For divers Garrapata is an oasis of accessible rocky beaches in a desert of sheer cliffs. This park has only two miles of beachfront but has many of Big Sur’s best beach dives. Dive sites with names like Mile Marker 67, Waterfall Beach, Reverse Cove, and Soberanes Point have thrilled divers for decades.
The site with the easiest entry, and arguably the best diving is Moby Ling Cove. This site was named by a diver while swimming back to the beach with a stringer of lingcod, when a small gray whale passed directly underneath him. Moby Ling!
The entry here is one of the easiest and yet one of the most intimidating. Divers need only do a giant stride off a large rock into about six feet of water, and a kick or two will put divers into water 15 to 20 feet deep. This leap of faith is much like jumping off a boat, but divers do need to check that they are jumping into deep water and not onto a rock.
Getting back onto the rocks after a dive can be a bit of a challenge, but with the confidence of experience it can be quite easy. Remember that along rocky walls the energy of the wave is directed up and down; so use the wave to get out of the water. Simply time the waves so one will deposit you on a ledge with a good handhold, and then scurry past the water line.
Directly offshore from the entry point is a large rock with a sloping south side and a vertical north side. Beneath this rock is an arch that is about 10 feet tall and about 30 feet wide at the base. Depth at the bottom of the arch is only 15 feet. This is the second largest underwater arch that I know of in Northern California — and it’s less than 50 feet from the beach!
To the right of the entry are a series of pinnacles with steep-sided mini walls with bases at about 40 feet. A thick growth of invertebrates will keep macro photographers quite busy. Yellow encrusting sponges, red strawberry anemones, and red and white rose anemones are found here in abundance. Look for tunicates and nudibranchs among the sponges, and crabs and shrimp in the nooks-and-crannies of the rocks. There is so much color here that you could easily spend an entire dive photographing the marine life on one small rock.
Along the southern part of the cove is a bit of sand with protruding rocks. The rock structure is not as dramatic as the southern part of the cove, but is interesting nonetheless. The low profile rocks are covered with a thick layer of palm kelp, and beneath the kelp divers will find sizable population of lingcod, cabezon, and rockfish.
Each year gray whales pass by Central California twice on their way south to calving grounds in the lagoons of Baja, and then on the return trip to Alaska and the Bering Sea. Soberanes Point is a great palace to whale watch from shore, and divers occasionally get to swim with them when they pass inshore during their January/February southerly migration. Even if you do not see a whale, this is a fantastic dive site.
At-A-Glance
Location: In Garrapata State park, about 8 miles south of Rio Road in Carmel and a bit south of mile marker 66.
Access and Facilities: Park along side of the road where cypress trees are on both sides of the road, a bit north of Soberanes Point. The trail begins right off the road and immediately splits. The path to the left takes you to Soberanes Point and the one to the right heads to Moby Ling Cove. The trail branches several times. Bear left, until you can see the cove, and then take the right branch. It’s a 100-yard walk to the water. Kayaks, but not small boats, may be launched here. There is an outhouse near the parking area.
Depth: 20 to 60 feet
Visibility: Better than average, 20 to 40 feet but may get over 80 feet in fall and winter.
Skill Level: Advanced
Photography: Excellent wide angle and macro photography. Great spot for fish and sea lion photos.
Hunting: Excellent spearfishing for larger-than-average lingcod, cabezon, and rockfish. There is fair scallop hunting in deeper water.
Conditions: This part of the coast is exposed to the prevailing swell and conditions can be very rough and can change rapidly. There are often strong currents past Soberanes Point.
← Previous Post
Next Post →