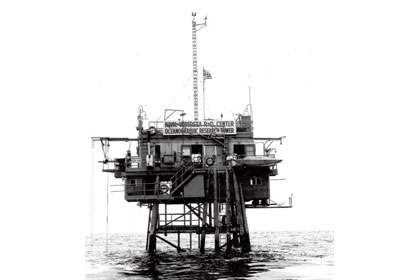 The ocean has a way of taking massive metallic creations of man, smashing and tearing them, and throwing them to the sea floor in a heap. Then in its own sweet time, it turns the wreckage into a colorfully decorated thing of beauty. Such is the case with the Naval Ocean Systems Center (NOSC) Tower off Mission Beach in San Diego.

The Tower began its life as a 100-foot tall steel structure carefully secured to the sea floor in 1959. Although having nothing to do with petroleum production, from a distance it looked much like a small offshore oil platform. Half of it was submerged and quickly underwent the process of being adorned with sea life.
Experiments conducted aboard the platform included temperature readings and variations, currents, sound projection, and subtle changes in sea chemistry. In short, it gave the Naval scientists a permanent, fixed base for their studies. The problem with such a fixed base is when the seas get rough, there is no place to run and hide and no picking up anchor and heading for safe harbor. During an especially severe storm in 1988 a rogue wave slammed into the rig, twisting it into a tangle of metal that now rests on the sea floor, where the marine world continues to redecorate.
The “Tower Wreck” lies within the area often referred in diving circles as “Wreck Alley” for the number of sunken man-made objects in the area. The Tower is actually the only true wreck in the vicinity. All the rest of the structures are vessels intentionally sunk as artificial reefs to assist in the propagation and attraction of marine life (as well as giving divers a great place to dive on what would ordinarily be just a flat, featureless sand bottom).
In Wreck Alley is the 366-foot long Canadian destroyer Yukon, which was sunk in July 2000 and rests at a depth of 100 feet. The Yukon is the most popular attraction In Wreck Alley. Considerably smaller is the artificial reef Ruby E, a 165-foot former USCG Cutter which was sunk in 1989 and rests at 85 feet. For most dive charter boats heading for Wreck Alley, these are the two primary destinations. For reasons I do not entirely understand, the Tower often gets overlooked. With a max depth of 60 feet, the Tower is an excellent shallower option.
With half of the Tower submerged for over 45 years and the remainder for over a quarter a century, the contorted remains are a colorful work of abstract art.
Every square inch of the wreckage is covered with some type of marine life. Dominant on the upper portions are some of the biggest mussels I have ever seen — the size of your fist! Wedged in between the narrow crevices between the mussels the keen eye (and ultra-macro lens) will see tiny crabs and shrimp. Here and there are rock scallops. But you can’t miss the huge Piaster stars that feast on the abundance of shellfish.
The lower 30 feet or so are covered in a beautiful array of two kinds of anemones. Adding the most color is a patchwork of corynactis anemones. There are hues of pink, red, and orange. Thousands of puffy white Metridium anemones, each about three inches tall and three inches across, stand out as the background against the blue-green water. Back away from the rig and the steel members look like they are covered in a fuzzy shag carpet.
Adding to the photogenic nature of the wreck are colorful fish that weave in and out of the cross members. There are small sheephead and calico bass as well as opaleye and blacksmith. Good-sized perch hang out on the interior of the metal mess in small groups.
While the wreckage is extensive it can be easily explored in one dive. Head for the bottom first which is the area many find the most interesting. Not only is there the main wreckage, and the enjoyment of entering the interior, spend some time exploring the twisted metal on the sea floor nearby. This is not a true overhead environment like many shipwrecks, but do keep an eye out for sharp metal and monofilament line. Bring a knife or other cutting tool.
Strong currents are rare here but surge is frequent in the upper sections. Visibility is variable due to frequent plankton blooms.
While no longer serving as a platform for marine research, the Tower now provides a home for marine life and a fun place for divers to explore.
At-A-Glance
Location: About a mile off Mission Beach, San Diego. GPS coordinates: N32°46.315, W117°16.121 (GPS for reference only.) The site is sometimes marked with a mooring buoy.
Access: Boat only. Short boat ride.  Launch ramps in Mission Bay.
Skill Level: All levels.
Depths: 30 to 60 feet.
Visibility: Variable but usually fair averaging 15-25 feet.
Photography: Excellent for both wide angle and macro.
Hunting: Discouraged in the Wreck Alley area.
Hazards: Boat traffic, sharp metal, fishing line.
← Previous Post
Next Post →