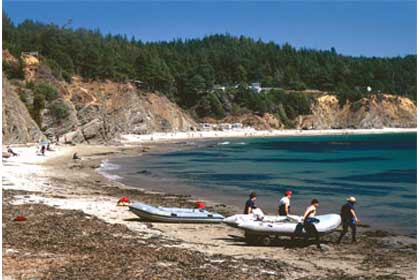 Mendocino County is home to an incredibly rugged and scenic coastline. Each year tourists come to marvel at sheer cliffs that drop hundreds of feet directly to emerald green water, and a coastline sculpted by the wind and waves into a maze of small bays, points and arches. Divers flock here because the underwater beauty is just as magnificent as that above the water.

Anchor Bay is located north of Gualala in Mendocino County. It was first called Fish Rocks Landing by mid-1800s settlers after the two small islands just west of the bay. The origin of that name is unknown but probably reflects the good fishing here. During the Coast Guard Survey of 1853 the bay was renamed Havens Anchorage after one of the ships officers. His name still marks the point just north of Fish Rocks. The name Anchor Bay was later taken from the local general store.
Access to the ocean is through the private campground just north of town. Nestled in a large stand of redwoods and amidst one of the prettier parts of the coast this campground has a reputation of being a friendly haven for divers and fishermen alike. The campground empties directly onto a large beach and, due to an eastern cut in the coastline, faces directly south. This provides protection from the prevailing northwest swell, and plenty of sun for beach activities. Most divers come here for the excellent abalone hunting and spearfishing.
The bay itself consists of a 20-40 foot rock and sand bottom and is generally not as interesting as Fish Rocks to the west and Quinliven Rocks to the east. Divers may swim to good abalone hunting grounds by walking to the eastern end of the beach and swimming 200 yards southeast. To reach Fish Rocks divers should be prepared for a half-mile swim each way. For this reason, most diving here is done from small boats or kayaks.
The best area for scuba diving is around Fish Rocks. There are two main rocks with a narrow beach between. A large colony of California sea lions resides here. On the open-water side of Fish Rocks diving depths range from 20 feet to over 100 feet, with a gradual slope to a sand bottom. This area is highly textured with tall pinnacles, deep cracks and high-sided canyons. Large rose and giant green anemones dot the surge channels. Many of the pinnacles and walls between 40 and 70 feet deep are covered with fluffy white Metridium anemones.
This area is good for spearfishing, with good-sized lingcod, cabezon and rockfish. Artifact hunters may enjoy searching for scattered remains of the 150-foot steamship Crescent City, which ran aground on Fish Rocks and sank on January 29, 1903.
The kelp bed east of Fish Rocks and between the rocks and the shore is very productive for red abalone. A large healthy bed of bull kelp covers the surface throughout the area, while palm kelp extends several feet above the bottom.
Hunters searching for game might miss much of the colorful invertebrate life to be enjoyed in the kelp. Small feather duster worms, orange sea cucumbers, and numerous purple ringed top snails are abundant here. Observant divers can find unusual nudibranchs, including the clown nudibranch, the thick-horned aeolid, and the white-lined dirona.
At-A-Glance
Location: Just north of the town of  Anchor Bay at the southern end of Mendocino County at mile marker MEN 4.64.
Access and Facilities: Access is through the Anchor Bay Campground. There is a day use or camping fee. Restrooms, coin-op showers, a fish-cleaning house, dive gear washing area, and kitchenette are available at the campground. Small boats may be easily launched from the beach. The town of Anchor Bay has a deli, grocery, several restaurants and inns. Campground reservations are accepted up to one year in advance, call (707) 884-4222. Enter the water at either end of the wide sandy beach.
Depths: Generally less than 30 feet near shore, the bottom drops off to over 100 feet on the outside of Fish Rocks.
Visibility: 10 to 50 feet.
Skill level: All levels.
Photography: Good macro and wide-angle.
Hunting: Great abalone hunting and good spearfishing for rockfish and lingcod.
Conditions: The cove is south facing and is generally very calm. Watch for big swell and surge during storms, thick kelp in summer, and boat traffic. The center of the beach has a relatively unpredictable shore break, making it easy to flip an inflatable. For this reason most boats are launched on the western part of the beach, affectionately known as “chicken cove.”
← Previous Post
Next Post →