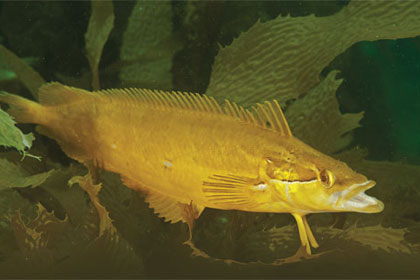 Divers from the San Francisco Bay Area or the Central Valley often drive to the Sonoma Coast and back in a single day. Mendocino County is a bit further away and an overnight or long weekend trip is usually more comfortable; and divers will need a place to spend the night. It is, of course, preferable to sleep where the accommodations are diver-friendly and near where you will dive. Caspar Cove is such a place where it’s a short walk from your campsite to a good dive site.

One of the area’s first residents was a German trapper named Siegfried Kaspar, and the cove and creek now bear his name. Siegfried’s origin is not known but it is suspected he jumped ship from one of the many European trading vessels; but we do know he collected bobcat, cougar, fox, otter, weasel, and raccoon pelts for the fur trade. Later William H. Kelley and Randall built the first sawmill, and a mill under various owners operated at Caspar until 1955 when it shut down for good.
Caspar Cove is a long cove that opens to the west-northwest. The floor of the cove consists of sand and gravel intermixed with rocks and boulders. It’s a calm place to dive with a few colorful anemones and other invertebrates to look at, but there is not much else to interest divers. However, the north wall of the cove is a wonderful place to explore. There is a maze of tunnels that lead back into a private little beach. Huge rocks jut up from the 15-foot bottom to the surface and are covered with colorful marine life: giant green anemones, red coralline algae, purple kelp and many sea stars. There are a few short abalones in the cracks, but a fair number of small rockfish can be found in the shallow water. Because of the shallow water and interesting rock formations this is a great place to freedive and kayak.
The south side of the cove tends to get most of the wave action and is less frequently dived than the north side. On days when the swell is small this is a great place to explore and to hunt. The abalones here tend to be small, but are in shallow water.
The really spectacular diving is not in Caspar Cove itself but along the rugged coast just north and south of the cove, and on the offshore pinnacles. The area between the south lip of the cove and the Point Cabrillo Reserve offers some of the most spectacular diving in all of California. This is a particularly pretty place to freedive since there are a lot of giant green anemones and an assortment of colorful sea stars. Huge fields of fluffy white metridium anemones, friendly game fish, and an assortment of nudibranchs will please the most well traveled diver. This area once held a lot of abalone, but it seems that the urchins have taken over much of the reef. Again, most of the abalones are in shallow water.
This is also a great place for spearfishing. Huge lingcod abound in the shallow waters, particularly in the late fall and winter. Spear fisherpersons who spurn the use of tanks will be in heaven here because of the abundance of large fish in 15 to 25 feet of water.
Those with access to a boat or kayak will want to explore the offshore pinnacles outside of the cove. Here massive rock formations jut up 60 to 80 feet from a 100 to 160 foot bottom. These are covered with an assortment of colorful invertebrate life.
The topside scenery is impressive, too. The coastline is pitted with caves and arches and harbor seals haul out on the offshore rocks. The bluffs are interesting to explore because of the unique rock formations and the abundance of marsh and sea birds.
At-A-Glance
Location: On Point Cabrillo Drive, exit from Highway 1, approx. 4 miles north of Mendocino.
Access and facilities: Limited but free parking on the edge of the beach. Small inflatable boats and dive boards may be launched. Campsites, showers, restrooms, dive gear sales, kayak rentals, and snacks may be found across the road at the Caspar Beach RV Park (707-964-3306, www.casparbeachrvpark.com).
Depths: 10 to 130 feet
Visibility: 10 to 40 feet
Skill level: Beginner within the cove, intermediate to advanced outside of the cove depending on conditions.
Hunting: Great spearfishing for lingcod, cabezon and rockfish; fair hunting for abalone. The Point Cabrillo Marine Reserve is in the southern part of the area. No game may be taken within its boundaries. Check with www.dfg.ca.gov for rules and boundaries.
Photography: Great macro and wide-angle photography. Better visibility may be found in the late summer and fall.
Hazards: Cove entries and exits are normally easy, but the mouth of the cove, particularly the south side, can be rough. Watch for boat traffic and thick kelp in late summer.
← Previous Post
Next Post →