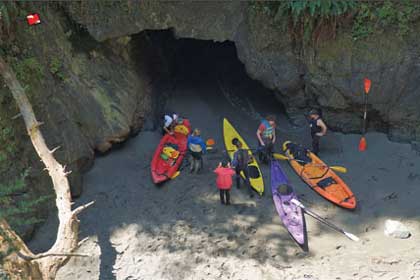 Before the discovery of gold in 1848, San Francisco was a tiny town of about 300. By 1853 San Francisco had 150,000 residences and needed wood to build the growing city. They found it in Mendocino County. The first mill was established near the present day town of Mendocino, and at one time nearly every tiny cove in the county supported a mill and port. One of the smaller mills was the Buckhorn Mill, owned by the Little River Mill Co., and was located at Stillwell Gulch. The mill closed in 1893, and the gulch and cove were renamed Buckhorn. The mill likely got its name from the area’s many deer and elk, which commercial hunters sold to the lumbermen.

Buckhorn Cove sits squarely in the middle of one of the most spectacular stretches of coastline in all of California. Sheer cliffs drop vertically into the Pacific, and are sculpted by wind and sea into amazing forms. The many, large offshore rocks create a labyrinth of protected coves, secluded beaches, and hidden passageways. You can kayak through tunnels, under arches, into huge sinkholes, along spectacular vertical cliffs and among offshore rocks. This is one of the best spots in California to kayak, and to dive from your kayak.
There are many different ways to experience Buckhorn Cove. Those with boats or kayaks will want to launch out of Van Damme or Albion. Small boats and kayaks may be launched from Van Damme State Park (camping, toilets, showers on beach, lots of parking), or larger boats and kayaks may be launched from either of the campgrounds at Albion Cove (day use fee, toilets, lots of parking).
There is direct access to Buckhorn Cove from the public easement at mile marker MEN 47.00 There is limited parking and no facilities along the west side of Highway 1. Walk along the road south for 100 feet and follow the southerly of the two trails to the beach.
You may dive south of Buckhorn by parking at mile marker MEN 45.24 near the end of the redwood wooden fence and walk south to find the trailhead. This public easement is called Dark Gulch on the map, but divers call it Heritage House after the B&B. A well maintained trail and staircase leads to a cobblestone beach. There is limited parking and no facilities.
Another access point is through the sinkhole behind the Little River Cemetery, called the Blowhole. It is possible to climb down the steep-walled sinkhole, but is unsafe and I don’t recommend it. Rather, kayak through a tunnel into the sinkhole at low tide. The tunnel is underwater at high tide.
Be sure to take time to explore the area’s great topside scenery before or after your dive. The hidden beaches are a great place for picnics. Those without a boat or kayak can gain easy access via public easements. Should you enter at Buckhorn Cove, the best diving is reached by swimming through the cave on the south end of the beach and into the next cove.
This is a wonderful area to dive when the surf is up because the offshore rocks disperse the wave’s energy before they reach the beach. The visibility is generally better in this area when compared to the nearby, larger coves, and more and bigger fish and abalone may be found here as well.
Bull kelp covers the nearshore surface during summer and fall and can be quite thick. The nearshore bottom consists of rock walls, vertical-sided mini-pinnacles, and rocky patch reefs. This topography presents a rugged terrain with deep canyons, small caves and tall pinnacles that jut up from the 20- to 50-foot bottom to near or above the surface. These rock walls have acquired a colorful growth of encrusting invertebrates. Look for coralline algae, sponges, sea stars, nudibranchs, and anemones.
The entire area between Albion and Van Damme is a hunter’s paradise. Most of the offshore rocks drop vertically to a sand bottom. Large abalones are often found on the rock at the edge of the sand. At other spots abalones hide in cracks between the many large rocks.
Directly off Stillwell Point on the south side of Buckhorn Cove is a group of rather impressive pinnacles known as Colby Reef. These can be easily located by wisps of kelp that come to the surface. Colby reef is a massive rock structure that begins in about 20 feet of water and drops to well over 100 feet. This is a particularly impressive dive site since the reef is carved with deep canyons, caves, swim-throughs, and the rock walls are covered with metridium anemones.
Colby Reef is also a great place for spearfishing. Larger-than-average lingcod and cabezon are still taken from this reef system along with numerous species of rockfish. In addition to trophy lingcod, unusual rockfish like China and vermillion are frequently found on this deep reef.
Visit Buckhorn Cove for the colorful underwater life and the abalone and fish hunting, but stay for the beautiful scenery.
At-A-Glance
Location: About a mile south of Van Damme State Park, and 3 miles north of Albion Cove.
Access and facilities: Small boats and kayaks may be launched from Van Damme State Park. Larger boats and kayaks may be launched from either of the campgrounds at Albion Cove. There is direct access to Buckhorn Cove from the public easement at mile marker MEN 47.00  There are three campgrounds: Van Damme State Park (www.reserveamerica.com), Albion River Campground (www.albionrivercampground.com/) (707-937-0606), and Schooner’s (www.schoonersrvpark.com/) (707-937-5707).
Depths: 10 to 100 feet
Visibility: 10 to 40 feet
Skill level: All levels depending on conditions.
Hunting: Good spearfishing for lingcod, cabezon and rockfish; great hunting for abalone. Check with www.dfg.ca.gov for complete rules.
Photography: Good macro and wide-angle photography.
Hazards: Cove entries and exits can be easy or challenging depending on wind and swell. The beach is protected from big waves by offshore rocks and offers a very protected entry. Watch for boat traffic and thick kelp in late summer.
← Previous Post
Next Post →