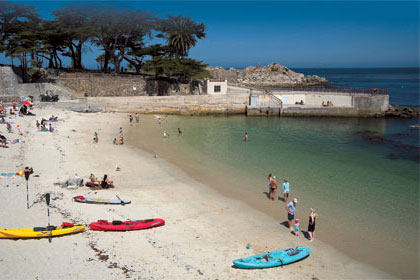 Lovers Point offers one of the most comfortable and underappreciated dives in the Monterey Bay Area. In the early days of Monterey this area was very popular among amorous teenagers. Now, it is a spot for those who love the ocean and diving. This is a particularly convenient place to dive since you can park near the water and find interesting diving close to shore. Surprisingly, this is one of those sites where unusual things can almost be expected to happen.

Lovers Point has two very different entries. As an experienced diver I normally choose to enter on the west side where the exposed entry is a gateway to deeper water and more fish. Here I describe the dive off the southerly of the two sand beaches on the east side of the point. The east-facing beach is very sheltered from swell coming from any direction, and is a perfect entry for new divers to experience Monterey.
The beach gives way to eelgrass-covered rocky ledges in 4-8 feet of water that drops away to a flat rock and sand bottom. Swim a little farther offshore to the east and the bottom changes to rock. The depth here is around 20 feet and gradually drops to 30 feet as you swim towards Hopkins Marine Station. This rocky reef is not flat, but has mini-pinnacles, boulders, and ridges that jut up several feet off the bottom.
This reef is mostly covered with a healthy layer of algae. Waters shallower than 20 feet are home to several species of brown algae. Some of these turn a golden yellow as they age and provide a very colorful backdrop for photographers. In deeper waters coralline algae predominates. Hiding among the algae are an incredible variety of invertebrates. There are many species of tunicates here — stalked, light bulb, and encrusting. Small and large crabs hide under the canopy of algae. Large rockfish hunker down in depressions in the reef. On a recent outing we noticed few large fish compared to nearby sites, but there was a great variety. These were mostly rockfish, but there were also at least two species of surfperch. Small gobies and sculpins were also found among the algae.
The shallow, inshore waters harbor one of the most abundant fish nurseries in the Monterey Bay Area. There were thousands of juvenile rockfish. Most were blue and vermillion rockfish, but there were many species I could not identify. There were also great schools of juvenile señoritas that moved through the water column like so many yellow cigars.
However, on a dive in early September great schools of 1- to 2-inch sardines took refuge in the shallow water to avoid predators and to take advantage of the rich inshore plankton bloom. We saw cormorants and common murres snatching sardines right before our eyes. These diving birds in turn forced the schools to the surface where pelicans and seagulls fed. Harbor seals and California sea lions joined the feast, while bottlenose and common dolphins came in from deep water to gorge themselves.
If you have the energy try swimming out a bit further from shore. The rock and sand bottom is dotted with large pinnacles. These are home to large fish-eating anemones and many rockfish. Bat rays are commonly found on the sand bottom between the rocky areas. These rays are the only members of the eagle ray family in California and feed on clams and other mollusks buried in the sand.
Lovers Point is such a beautiful and popular destination that the City of Pacific Grove has a few unusual rules that regulate scuba diving. During May through September diving is prohibited on the southeast beach on Friday through Monday from 11:30 AM to sunset. Divers may not use the northeast beach from May through September, and may always use the west beach. It is illegal to disturb landscaping. You may find the complete rules at: http://www.codepublishing.com/CA/pacificgrove/ (search for “scuba”).
At-A-Glance
Skill Level: Beginner to advanced
Location: Pacific Grove on Ocean View Boulevard, about half way between the Monterey Bay Aquarium and Point Pinos.
Access: Park along Ocean View Boulevard on the north side of the point or in the small parking lot south of the point for beach access via stone stairs.
Facilities: Restrooms, a food stand, kayak and paddleboard rentals and picnic areas. Several restaurants a short walk away. Parking areas may fill up for the weekend brunch crowd, or on summer weekends.
Entry and Exit: You may enter off the sand beach on the south side of the pier. It is easier to use the steps on the pier to avoid getting sand in your gear.
Depth Range: 10 to 30 feet
Conditions: Predictably very calm
Visibility: 10 to 40 feet
Photography: Good macro photography for invertebrates and small fish, not so good wide-angle photography.
Hunting: None, this site is within the Lovers Point-Julia Platt State Marine Reserve.
Cautions: Watch for thick kelp, surge, and kayaks and paddleboards
← Previous Post
Next Post →