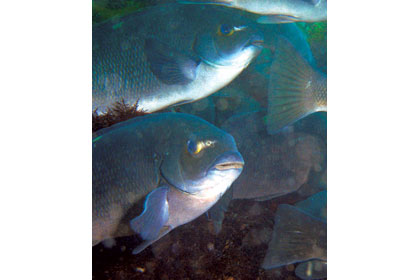 While Anacapa Island is often visible from the mainland, it’s often shrouded in haze, giving it a mirage-like appearance. The word anacapa is actually a European derivative of the Chumash Native American word for “mirage.” This island is the closest to the mainland of any of the California Channel Islands at only 11 miles out. In terms of land mass, Anacapa is the second smallest of the Channel Islands at only 699 acres. It is actually a chain of three islets running east to west — East Anacapa, Middle Anacapa, and West Anacapa. Cliffs that drop sharply to the water below surround all of Anacapa. The only practical place to make landfall is at Landing Cove on the far eastern end of East Anacapa Island. It is here that both surface hikers and underwater explorers are first introduced to the beauty that is the Channel Islands National Park.

The iconic image of the Channel Islands National Park is Arch Rock located on the eastern end of East Anacapa Island just a few hundred yards from Landing Cove. The arch is expansive and stunning surrounded by rock spires, reefs and kelp forests with pelicans and gulls dotting the sky overhead. But not everyone knows there is another arch nearly as spectacular only a few hundred yards to the west. It is easy to understand why it gets missed. This arch is underwater!
Outward from the surface cliff face just east of Landing Cove divers will find a submerged but tall rocky ridge that is just 30 to 50 yards from the island. Surface kelp marks its position. It is within this reef ridge that the arch is located. The ridge tops out about 20 feet then drops to 40 to 60 feet sharply depending on location. The top of the arch is in about 35 feet. The bottom under the arch is 50-55 feet. The arch is actually more of a short tunnel but daylight is usually visible from one end to the other. Passage from one side to the other is easy as the arch is approximately 20 feet tall and 30 feet wide at the base. If possible, for maximum visual effect and drama, pass through the arch from the island side to toward the open ocean. The play on light is stunning.
Landing Cove’s abundant marine life is a testament to no-take reserves. For over 30 years this has been a “no-take” zone. Nothing on the ocean floor in this area and to the west is to be taken or disturbed. The large size and diversity of marine species is a joy to behold.
On my most recent visit I encountered the biggest aggregation of opaleye I’d ever seen. There must have been 50 or so. Normally a somewhat shy fish they let me move in enough for some close portrait shots.
I also encountered a large school of black perch. These fish actually vary in color from amber to chestnut to a dark brown in adjustment to their surroundings.
Large male sheephead dominate the scene. Their snaggletooth appearance and tri-color pattern of white, black, pink and black again make for a stunning display.
Other reef fish divers can expect to enjoy include big calico bass, bright orange garibaldi, camouflaged kelpfish and sedentary rockfish. In addition to the usual colorful invertebrates of urchins, stars and anemones, you will find nudibranchs (most of them dorids), lobster (some quite large) and pink abalone. Here and there are orange-smile rock scallops. Approach slowly without bumping the reef or casting a shadow on this interesting animal for an ultra-macro shot of the multiple tiny eyes in its mantle.
Conditions in the cove area are generally quite good. Landing Cove is protected from both the south swell and prevailing northwest weather. This location is nearly always diveable. Currents are light inside the cove but toward the points and on the outside they can be quite strong. Water clarity is generally very good.
Watch out for boat traffic to the west of the underwater arch under the two mooring buoys within the cove. Stay well clear of the mooring buoys, boats and the small landing attached to the cliff face.
Most visitors to Anacapa Island are hikers. If you ever get the chance, take in a dry-side look at Anacapa Island. Broad vistas from the island’s top are awesome.
At-A-Glance
Location: Mainland side of the easternmost end of East Anacapa Island. GPS N34°01.030′, W119°21.652′ (Warning: GPS Coordinates are for reference purposes only. Not for navigation. Caution should be taken in using GPS coordinates since there can be errors in the accuracy of your receiver.)
Skill Level: All, but divers should be comfortable in overhead environments in order to swim through the arch.
Diving depths: 20 to 60 feet
Visibility: Very good, averaging 40 feet.
Access: Boat only.
Conditions: Beware of possible strong currents outside the cove and around nearby points.
Hunting: None permitted. This is a reserve.
Photography: Excellent kelp vistas and at the entrances to the arch. Good macro and fish portraits.
← Previous Post
Next Post →