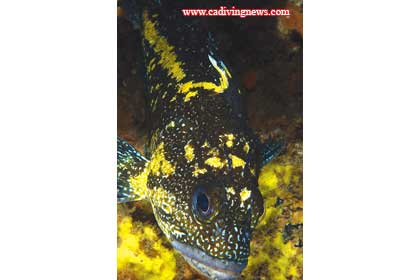 Some dive sites are good for invertebrates, others are good for fish, and still others have interesting bottom topography. It is, however, unusual for sites to have it all. One of the Camel Bay sites that, indeed, has it all is a seldom-visited spot called Horseshoe.

Horseshoe is best described as one of the “outer” outer pinnacles and is a newly discovered spot a bit further offshore than the Outer Pinnacles in Carmel Bay. This raised rocky area is shaped much a “U” or horseshoe (hence the name) and the open-end roughly points southeast. The high spot is about 53 feet and the deep-water surrounding the rocky area is over 90 feet. Surrounding the horseshoe is a number of narrow, steep-sided canyons and spires.
Horseshoe has one of the more rugged bottom topographies of any dive site. For those who are familiar with the southwest, its structure looks something in between Monument Valley and Antelope Canyon. In some areas long, steep-sided canyons wind through the rocky mass. In other spots spires jut up dramatically some 40 feet or more from the 90-foot bottom. The canyons are so steep that even in a respectable swell there was little to no surge in the comfort of the canyons.
The upper portions of the rock are adorned with the most colorful cornucopia of sessile invertebrates that I have seen in many years. The hydrocoral here is particularly impressive. Some stands are big, stout and ancient. Others are tiny, and very delicate. All are pristine with scarcely a broken branch to be found. Divers should be especially vigilant of their buoyancy here to keep the coral in this pristine condition. Among the hydrocoral are patches of deeply colored orange and yellow sponges, along with pink and purple colonies of tunicates, and a few patched of strawberry anemones. From a distance the reef seems to glow with a rainbow of colors. This is especially true on a sunny day.
Going a bit deeper the canyon walls are not as completely covered with invertebrates as the shallower portions of the reef, but the fish life is more abundant. There were several China rockfish hiding back in one of the smaller caves, and scores of gopher, copper, grass rockfish. A large school of blue rockfish circumnavigated the rocky plateau. The presence of China rockfish was particularly refreshing since they are relatively rare and are normally found only on rarely visited, offshore reefs in California. There were also a number of small lingcod and a horde of gobies, kelpfish, and juvenile rockfish hiding in cracks and caves. This is a fish photographer’s or fish watcher’s paradise, since this is a reserve and the fish seem to know they are protected.
The deeper walls on our late January dive were covered with nudibranchs, mostly Monterey dorids and yellow edged cadlinas. The cadlinas were particularly amorous that day and most were paired off mating and laying eggs. There were many egg masses on the rocky wall, promising a large number of nudibranchs next year. A single Strong’s Berthella was feeding on a bryozoan. This is a relatively rare, distant relative of the nudibranchs, and was particularly photogenic with its rolled rhinophores and spotted backside. This pleurobranch looks like a nudibranch, but has no external gills; its gills are hidden under its mantle.
Horseshoe is not divable every day because it so exposed and vulnerable to the prevailing swell. On the right day you will find no better dive in the Monterey area with both interesting marine critters and spectacular bottom topography. Monterey’s charter boats like to dive this site, conditions permitting.
Location: About a mile south off Pescadero Point in Carmel Bay. You will need GPS to this site at 36° 33.300′ N, 121° 58.154′ W.
Access: Boat only.
Depths: 53 to 91 feet.
Skill Level: Intermediate or better.
Photography: Great photography for invertebrates and reef fish. Great wide angle photography for hydrocoral and reef scenes.
Hunting: This site is within the Carmel Pinnacles State Marine Reserve and nothing may be taken.
Hazards: Divers should watch for swell, currents, and boat traffic.
Charter Boats Serving the Area:
Escapade — (831) 465-1185
Beach Hopper II — (408) 463-0585
← Previous Post
Next Post →