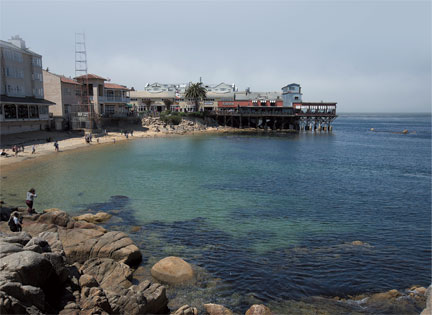 Each and every one of our California dive spots has a long and rich history. Take McAbee Beach in Monterey, for example. In the 1890s John B. McAbee found the inspiration to set up a seaside resort along what would later be called Cannery Row. He purchased some land in the center of the Row, put up a few tent-cottages, and purchased some small boats to rent. On summer Sundays this was the place to sunbathe, take a dip in the ocean, and to see and be seen. Still, the weekend business wasn’t enough to sustain the enterprise, and John leased the beach to the Monterey Chinese community after their enclave at Point Cabrillo burned to the ground in 1906. Today McAbee Beach is known as a great dive site.

Most divers enter from the south side of the beach because the most reliable parking is on the south side across the street from El Torito. Small to no surf makes the entry a breeze, and a short swim will put you in 20 feet of water. The bottom near the shore consists mostly of sand, giving way to rock and sand. As one proceeds deeper a rock and boulder bottom predominates. The inshore rocks are covered mostly with eelgrass.

The offshore bed of giant kelp is a wonderful place to dive. The kelp provides food for a lot of invertebrates, and shelter for adult and young-of-the-year rockfish, as well as otters. A lot of divers head straight to the bottom out of habit. However, they should take some time to investigate the kelp as they descend. During the late season a furry growth of bryozoans covers many of the kelp fronds. Sometimes you might find nudibranchs or shrimp up on the kelp feeding on these bryozoans.

The rocks are covered with an assortment of brightly colored invertebrates — sponges, anemones and tunicates. Several species of dorids and nudibranchs are found here, too. Look for blue rockfish and kelpfish swimming about, and small fish back in the cracks of the reef.

Sea otters are common here, but are usually very shy and not curious about divers. Otters enjoy long afternoon naps. So they don’t drift away while napping they often wrap themselves up in a bit of giant kelp.

A lot of things have happened at McAbee over the years and divers can find pieces of history if they look around. A number of lengths of pipe run from near shore out to about 40 feet. These were used to pump the sardines from offshore boats to the canneries. Look for rockfish hiding in the pipes, and halibut in the nearby sand.

One of the most memorable events at McAbee Beach was the sinking of the SS Gipsy. The Gipsy was a 239-ton, wooden-hull steamship. Under the command of Captain Herman D. Leland she made the run between Monterey and San Francisco for nearly 30 years. She was so reliable that the nickname “Old Perpetual Motion” was aptly applied, and her captain was said to have known every rock and reef along the coast.

In September, 1905 Captain Leland took a much deserved vacation and put the vessel in the hands of Captain Thomas Boyd, a good sailor, but inexperienced with Monterey. He mistook the buoy off China Point, where Hopkins Marine Station is today, for the entrance to the Monterey Harbor. The ship ran aground on the rocks just offshore of the Fish Hopper Restaurant, and died a slow death in the rocks and surf. The soldiers from the Presidio thoroughly enjoyed the 400 cases of bottled beer and 100 kegs of steam beer that washed ashore. There is little to see of the wreck today as some salvage was done and the wooden parts did not last long. The boiler can still be found off the Fish Hopper. It is heavily overgrown with marine life and is easily mistaken for a rock.

Divers of all levels can enjoy McAbee’s rich marine life and history under very calm conditions. After your dive you won’t have to walk very far to find a good place to eat and recount your dive, along the famous Cannery Row.

Location: McAbee Beach is located on Cannery Row between Hoffman and Prescott Streets in the City of Monterey.

Access: Moderate walk to a sandy beach from parking lot diagonally across the street from the El Torito Restaurant, or in the parking garage two blocks away on the corner of Hoffman and Wave Streets.

Facilities: None at the entry. The nearest public toilets are located in the parking structure on Wave Street. Kayaks may be launched here, but not boats. Restaurants, hotels and shops surround the beach.

Entry and Exit: Enter off the sand beach. This is one of the most protected entries in Monterey.

Hunting: None for divers. McAbee Beach is within Ed Ricketts State Marine Conservation Area, only finfish may be taken with hook and line, no spearfishing is permitted.