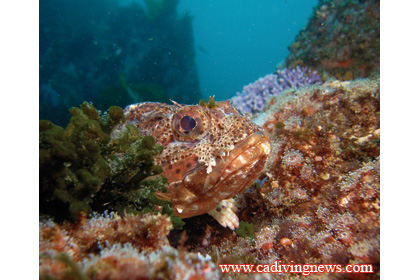 Unexpected marine encounters are what make a dive truly special. Fortunate for us in California, that is a frequent occurrence. Such was the case of our most recent dive to Gull Island, a rocky outcropping off the backside of Santa Cruz Island.

We dropped down through the kelp forest to a moderately slopped bottom at 45 feet. Cruising west as the divemaster had suggested, we ran into the mini-wall that ran approximately north-south. The water clarity was pretty decent, about 40 feet, as we followed the wall north out to sea.

A Marine Protected Area for over six years, fish have moved back into the area and are abundant. Rockfish are common and dot the ledges along the wall. Calico bass hover in the kelp forest and sheephead are large. This place seems to be especially abundant with stars –big pisasters, huge sun stars and colorful dots of blood stars. But we were looking for the color of purple.

We were looking for was the purple hydrocoral growths that dot this wall. This is one of the few spots in the Northern Channel Islands that purple coral grows. With the good visibility it was not long before we came across our first cluster, its rich color standing out in stark contrast to the surrounding rocks covered with algae and red corynactis anemones. Exciting, yes, but frankly this is no Farnsworth Bank, the quintessential mega-garden of purple hydrocoral found off the backside of Catalina Island. We explored further to see lobster in the jumbles boulders at the base of the wall and along the cracks. Colorful nudibranchs were here and there and small reef fish darted about. This was a pleasant casual dive; just what I needed after the hectic week I’d had at the office the week before.

Turning a corner on the wall, we got a surprise– a humongous torpedo ray, the biggest I’d ever seen–four feet long. Also known as the Pacific electric ray, this animal is completely unafraid of divers and has even been known to swim straight at them. This one was not going to change that reputation.

We positioned for a photo, Kim behind as the model, and myself with the camera in front. He cruised along at a very leisurely pace about two feet off the bottom. Lighting was good and the ray was cooperative. Kim, however, was hanging back. I understood her fear. These rays can pack a hard bang of electricity if provoked. Don’t get too close and whatever you do, don’t touch it! I gestured to Kim to move in closer for a better shot with the ray in the foreground and the diver in the back. She looked at me like I was crazy but she complied, coming within just one foot! Now I was the one looking at her thinking she was crazy!

Air was running low and the ray was leading us off into deep water so headed back along to the wall and followed it back to where the boat was.

Special thanks to the dive charter boat Peace for assistance in creating this article.

Dive Spot At A Glance
Location: West side of Gull Island on the backside of Santa Cruz Island, GPS N33°57.015′ W119°49.659′ (do not use GPS as your sole source for navigation).
Access: Boat only. Several dive charter boats serve this location from Ventura and Santa Barbara (see list below).
Skill Level: All when calm and little or no current.
Depths: 40 to 90 feet.
Visibility: Good, averages 40 to 50 feet.
Photography: Very good in kelp forest and along mini-wall speckled with colorful marine life. Sea lions and other big animals occasionally visit.
Hunting: None. This is part of a Marine Protected Area. Nothing may be taken.