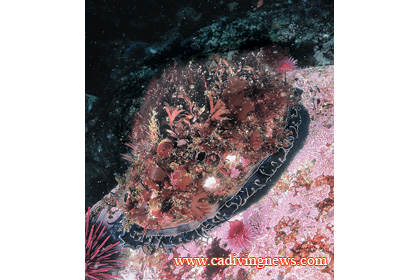 Back when I was a new diver I embraced a number of dive sites for their easy entries and abundance of marine life. Like many, as I gained more experience I sought out more advanced sites, with the promise of more marine life. One of my formally favorite sites is Gerstle Cove, and I must admit that it has been nearly eight years since I dived there. This year I took a new diver there and was truly sorry that I was away so long.

Gerstle Cove is found within the boundaries of Salt Point State Park. The cove is a marine reserve in which no marine life may be taken, and the reserve boundaries are clearly marked by two yellow posts. The cove has a rugged, rock bottom consisting of large and small boulders and a small amount of sand between the rocks, with depths ranging from 10 to 30 feet within the reserve. Palm kelp stands three to four feet from the bottom in both shallow and deeper areas, while bull kelp forms a canopy over the deeper areas.

Within the reserve is a profusion of life. Larger than average red abalone are found within the reserve in abundance, along with large game fish. This is an unusually good place to photograph game animals. Normally, large game fish such as lingcod and cabezon are a bit skittish, but in the absence of spear guns, they have developed a complacent attitude toward divers. In the absence of fishing these animals grow big and fat.

Outside the reserve is a 30-foot flat rock bottom that gradually slopes down to 90 feet. Abalone move around a bit and the dumb ones wander outside of the reserve. Good abalone diving for seven-to eight-inch animals may be found in 15 to 25 feet of water just outside of the reserve. The flat bottom offers few hiding places for the tasty mollusks, making this a good ab spot for beginners. Do be careful game hunting here. I did observe several divers inadvertently take game in the reserve and were fined.

The best abalone diving in the area is off of the rocks on the north side of Salt Point. Park at the near end of the Gerstle Cove Parking lot and hike the short distance to the rocky beach. Be very careful about entries and exits here. This point is very exposed to waves and swell, and the conditions can change rapidly, making it diveable only on calm days. A healthy population of eight-to nine-inch abalone may be found in 15-30 feet of water. This area also has some very pretty underwater topography with large rocks, overhangs and an abundance of colorful anemones and sponges.

If you venture into deeper water the far side of the kelp bed look for larger game fish: lingcod, cabezon and rockfish. Several species of anemone including the bright red, rose and the giant green anemone dot the bottom. Colorful orange sea cucumbers are common and some rocks are covered with red bat stars. Several species of nudibranch are common including the yellow-edged cadlina, the clown nudibranch, and the thick-horned aeolid.

Our outing to Gerstle Cove proved to be both rewarding and enjoyable. My recently certified friend got to see some of the marine life that makes Northern California famous in a relaxing setting. I got my limit of abalone. Yes, I had to work it a little harder, and they were a little bit smaller than I am accustomed. But, both my friend and I had a good time. Is that not what diving is all about?

Dive Spot At A Glance
Location: Salt Point State Park is located about 18 miles north of Jenner on Highway 1.
Access and entry: Enter the Park by the main entrance near the south boundary. Parking is available at the top of the bluff above Gerstle Cove. The lots fill up quick, so plan on getting there early on holiday weekends. Access is via a paved path to a boulder-strewn
beach. There are restrooms, showers, and small boats may be carried over the rocky beach.
Depth: 10-50 feet
Visibility: 10-40 feet
Skill: Novice to advanced in the cove, intermediate of better off the point.
Photography: Excellent macro as well as good wide-angle photography. Good place to photograph game fish.
Hunting: Gerstle Cove is a marine reserve and no marine life may be taken. The reserve boundary is clearly marked by two yellow posts and no hunting is allowed inshore of these posts. Make sure you are well outside of the reserve when hunting to avoid being ticketed. Outside of the reserve there is good spearfishing for lingcod and rockfish as well as good hunting for 7 to 8 inch abalone.
Hazards: Watch for big surf and swell along exposed points. Also, be aware of boat traffic and plan on navigating under the thick kelp bed during the summer months.
Camping: Group and individual campsites are available. For reservations call: 800-444-PARK.
Conditions: (707) 847-3222.