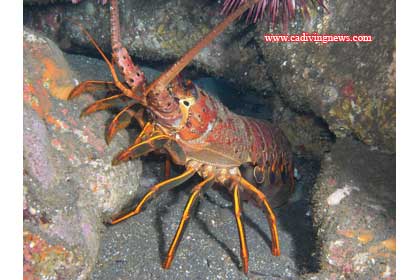 The engine was off and the Conception was anchored when I awoke in the wee hours of the morning. I rolled out of my bunk and stumbled topside. The ocean was calm, with only a slight swell, and there was no other boat in sight. Off in the distance I saw the outline of familiar mountains. We were anchored on the backside of Catalina, on a fabled site called Farnsworth Bank.

While conditions appeared favorable, it was early. When the sun rose we might find the water was murky. There could be strong currents. The wind might blow in and whip up waves.
Farnsworth looked good now but it might not later. Time would tell. I went back to bed.
A few hours later, I surveyed the scene with a cup of coffee and rising optimism. The water was still calm, though there were long rolling swells, and we were still the only boat on the bank. The sky was clear and the sun shone brightly.
I quizzed crewmembers returning from their anchor-check dive about what they’d found. They said the boat was anchored on the high spot, Farnsworth’s shallowest area. Vis was terrific, there was no current and the water temp was in the middle 60s. Conditions were rarely this good. Now I got excited.
Farnsworth Bank is one of Southern California’s prettiest dive sites. A mile and a half off Catalina’s Ben Weston Point, it is about 1,100 yards long and 600 yards wide. Recent researchers, visiting the site in a submersible, described the bank as, “A complex of very sheer and vertical pinnacles that are heavily broken with crevices….” The high spot is at 54 feet while depths on the sand and mud bottom exceed 250.
The bank was named for George Farnsworth, who took fishing parties there in the early 1900s.
Purple hydrocoral thrives on the bank’s vertical walls and the heavy currents that bring food and clean particulate matter from the coral’s branches.
To protect the hydrocorals from commercial collectors, Farnsworth was declared an Ecological Reserve in the early 1970s. It is currently a State Marine Conservation Area. While harvesting purple hydrocoral is prohibited, you may take other marine invertebrates, finfish and marine aquatic plants as long as you adhere to California Fish and Game regulations.
While the hydrocorals are Farnsworth’s star attraction, they aren’t all the bank offers. There is a plethora of invertebrates, among them yellow zoanthids and Corynactis anemones. Blue-banded gobies are ubiquitous. There are also gorgonians, moray eels and a variety of nudibranchs. Free divers hunt for yellowtail here.
As I descended the anchor line on my first dive, hundreds of blacksmith schooled above the high spot. Visibility was at least 60 feet and the water was well illuminated. Purple hydrocorals were everywhere. They were stunning. I was amazed at their numbers and their size. They were much larger than I remembered.
My focus was on photographing the corals and I single-mindedly pursued that goal with a new camera that refused to function the way I wanted it to. It was frustrating because purple hydrocoral isn’t all that common. A close cousin of the fire corals found in tropical waters, Stylaster californicus isn’t a true coral but one of the species of hydroids in the Phylum Cnidaria, which also includes anemones and jellies.
Purple hydrocoral has been found as deep as 368 feet and as shallow as 15. The colonies may reach 12 inches in height and their bases may be 24 inches across. They occur from San Francisco to Baja California and grow slowly — less than one-quarter of an inch a year. The branches are very brittle and, if broken, stop growing for about six months.
That first dive was the best I’d ever made on Farnsworth. Conditions were so good Captain Glenn parked on the site for hours. That’s rare.
Back on the boat, I discovered what I’d missed. Several people had encountered a large, friendly torpedo ray and were all too happy to share their photos and videos (gnashing of teeth). Others had found an enormous moray hanging out in a cave decorated with purple hydrocoral (more teeth gnashing). I had to go back in.
Although the second dive was above average for Farnsworth, it couldn’t match the first. While the corals were still vibrant and beautiful, the water clarity had deteriorated, the ray didn’t visit me and I couldn’t find the moray. Still, I surfaced with a huge smile on my face. I had just made two dives on Farnsworth in one day — and conditions had been perfect on the first one.
A few days later, while looking through photos shot on earlier Farnsworth dives, I discovered that 25 years had elapsed between my last dive there and the most recent one. My, how the years had flown! No wonder the corals looked so much bigger.
← Previous Post
Next Post →