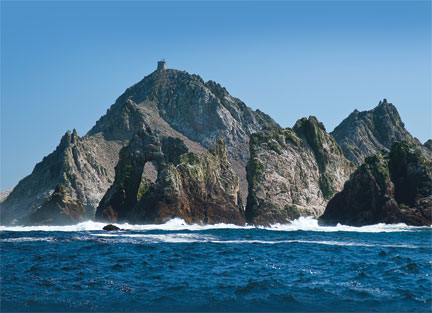 Access: There is a special closure around Southeast Farallon Island under the California Marine Life Protection Act that defines where boats may travel and anchor. Visit wildlife.ca.gov/Conservation/Marine/MPAs.

Facilities: None, except what you bring with you on the boat.

Entry and Exit: Boat dive only

Photography: Opportunities to photograph white sharks and feeding events are the draw, but numerous species of marine mammals and sea birds may be photographed as well.

Hunting: This site is within the Southeast Farallon Island State Marine Reserve and nothing may be taken.

On a clear day you can see rocks offshore of San Francisco from the Farallon Islands, a group of seven named islands and associated rocks some 30 miles west of the city. Few Californians are aware of these islands and even fewer have visited them. Although they are administratively part of the city and county of San Francisco, they are worlds apart. This is a wild and untouched place, where wildlife is protected on the island and in the water, and raw nature plays out in front of visitors each day. Only permitted, research scientists can spend any length of time on the island, but others can experience the islands by boat.

The Farallon Islands were certainly visited several times during the mid-1500s but Friar Antonio de la Ascension named them in 1603. Farallones, the Spanish name, describes pillars that rise out of the ocean. These islands proved so hazardous to shipping that early mariners dubbed them the “Devil’s Teeth.” Early sailors gave them a wide berth, so wide that they could not see the entrance to San Francisco Bay. It required an overland expedition to “discover” the bay in 1769.

During the 1960s and 1970s adventurous scuba divers visited the islands in search of game. Too many of them had close encounters with large sharks and interest in diving there waned. In 1998 commercial shark diving took hold and developed into a thriving business. Diving with white sharks is a common item on bucket lists, and trips normally fill up. Shark diving at the Farallons has, until recently, been conducted from floating cages, and sharks are attracted to the cage using seal-like decoys. It is truly awe-inspiring to view a large shark from the safety of a cage, especially as it bites a decoy.

Great White Adventures has recently kicked the experience up a notch by using a submersible cage that is lowered near the bottom. The deep cage greatly enhances shark diving opportunities since sharks are so exquisitely camouflaged that they are difficult to see from a floating cage, unless they get very close. From the bottom they are much easier to recognize at a distance, and they are more curious of the cage.

The submersible cage also gives divers the opportunity to experience the varied and diverse bottom topography and marine life around Southeast Farallon Island. Fishermen’s Bay is a rock and sand patch reef. As you move east out of the bay the bottom drops off into square-sided canyons. One area drops vertically from 30 feet to over 50 feet on both sides. The walls are covered with sponges, tunicates and strawberry anemones. These walls are home to some of the largest rock scallops I have ever seen — some are over 12 inches in diameter. There are not as many large fish here as at other parts of the island, but there are large numbers of small fish — sculpins, gobies, and painted greenlings. These dart to and fro feeding on the thick schools of tiny fish that hover just above the rocks.

Mirounga Bay also has a dramatic topography. Here large boulders and steep-sided pinnacles dot the bottom. Everything seems bigger here. Some of the rocks are covered with enormous red, yellow, or orange encrusting sponges.

As our cage descended we were greeted by a few of the largest, fattest, and most curious vermilion rockfish I have ever encountered. Unusual, since vermilions are normally quite shy. There were larger-than-average gopher rockfish hiding out in nooks on the bottom, with a few exceptionally large lingcod.