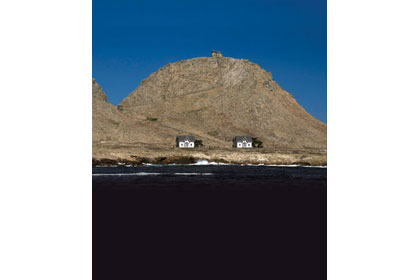 Fewer than 30 miles west of the Golden Gate Bridge are found four groups of small islands, islets and rocks that make up the Farallon Islands. From the Spanish farallon, meaning “pillar” or “sea cliff” and collectively known as the Farallons, the islands are unique since they are as wild and untouched as any remote island can be and are very close to a major metropolitan area. Part of the City of San Francisco, they remain unspoiled because as early as 1909 they were recognized as special places that needed protection. The islands are currently protected as a National Wildlife Refuge, and the waters surrounding them as a National Marine Sanctuary and as State of California Marine Protected Areas.

These islands sustain the largest sea bird breeding colony south of Alaska and contain 30 percent of California’s nesting sea birds. Some 300,000 birds nest here each year, including most of the world’s ashy storm petrels. Five species of pinnipeds haul out and breed here including harbor seals, elephant seals, California sea lions, Stellar sea lions, and northern fur seals, Blue, gray, humpback whales feed in the offshore waters, along with orcas and numerous species of dolphin and porpoise.
Since 1998 divers at the Farallons have had the opportunity to view great white sharks from the safety of a cage. The white sharks here are among the largest in the world and 15 to 18 foot animals are regularly encountered, with occasional sightings of 20-footers. Each year 200 or more white sharks visit the island to feed. Their principal food is the northern elephant seal. White sharks maintain their body temperature about 10 degrees above the water temperature and need lots of calories. Elephant seals are an ideal food source since they are large, their bodies contain lots of high calorie fat, and they are not as observant and agile as other seals and sea lions.
Visitors to the Farallon Islands enjoy the opportunity to observe natural predation. An average of 1.3 predation events take place each day during shark season, which runs September through November. The sight of a 600-pound elephant seal propelled out of the water in the jaws of a white shark is truly remarkable. Sharks seem to prefer year-old seals returning to the island for the first time and avoid the 5,000-pound adult males.
The sharks mainly visit the island in the fall. During spring and summer months (the off-season for shark activity), divers once enjoyed exploring around all the islands. Now the waters around North Farallon, the Isle of St. James, and parts of the Southeast group are closed to access under the California Marine Life Protection Act. The available dive sites are at Noonday Rock and Middle Farallon.
At the far north end of the Farallon chain is Noonday Rock, a submerged pinnacle marked by a whistle buoy. The rock takes its name from the Noonday, a clipper ship who hit the rock and sunk in 1863. The area around Noonday Rock is a raised plateau a half-mile or more across. While much of the bottom is between 100 and 200 feet deep there are numerous high spots. The best diving is not at the highest point but at a deeper, nearby pinnacle.
Alan’s High Spot was named after Captain Alan Cull who found this site in the 1996. This area has a relatively flat top at 70 feet that is deeply carved with canyons. The rock then plunges with vertical walls on all sides to depths well beyond a sport diver’s limit. Thick schools of blue and black rockfish, and sardines hover above the rock. China rockfish and large lingcod are abundant. Every inch of rock is covered with colorful, encrusting invertebrates. Strawberry anemones and hydrocoral are the predominate invertebrates here, but rock scallops the size of serving platters are everywhere. This area has one of the nicest collections of large hydrocoral trees I’ve ever seen. Wolf eels inhabit many of the rocky crevices and giant Pacific octopuses often are found at the high spot.
Another great site is called Sami’s Wall, which starts at 50 feet and drops off steeply to 150 feet. Lots of hydrocoral and big fish are found here.
Middle Farallon is about two miles northwest of Southeast Farallon and is only about 20 feet in elevation. The bottom drops steeply on the south side to form a wall pocked with many nooks and crannies that house rockfish, cabezon and wolf eels. The overhangs are filled with large rock scallops. The invertebrate life here is unique and colorful. Many of the rocks are covered with encrusting red and orange sponges.
At-A-Glance
Location: Southeast Farallon Island is located about 28 miles west of San Francisco. The Noonday Rock buoy is not located at any of the high spots. The 18-foot high spot is at 37°47.586′ N, 123°09.946′ W. Alan’s High Spot may be found at 37°47.699′ N, 123°10.433′ W. Sami’s Wall is at 37°47.690′ N, 132°10.296′ W.
Access and Facilities: Boat dive only; and only with experienced captains. Private boats may be launched from the San Francisco Bay area public ramps. Shark diving charters leave from Emeryville and San Francisco.
Depth: 20 to 120 feet.
Visibility: 10 to 60 feet
Skill Level: Advanced with offshore experience for reef diving; non-certified divers may dive with white sharks from cages.
Hunting: The North Farallon Islands and Southeast Farallon Island State Marine Reserves prohibit hunting around these islands. There is a 1000-foot closed area around North Farallon and a 300-foot closure around Isle of St. James and the western side of Southeast Farallon and Maintop Islands. There is also a 300-foot closure offshore of the east side of Southeast Farallon Island from December 1st to September 14th each year. No vessel shall be operated or anchored in the closed areas. The eastern side of Southeast Farallon Island is open for shark season. Hunting is allowed at Middle Farallon and Noonday Rock, but is not advised due to the presence of white sharks. Check with www.dfg.ca.gov for complete rules.
Photography: Great macro photography even on days when the visibility to poor. Great wide-angle photography of reef scenes when the visibility is better. Fantastic opportunities for fish portraiture, including white sharks.
Hazards: Big seas, access to extreme depths, currents, sharks. Sea conditions here can change rapidly.
← Previous Post
Next Post →