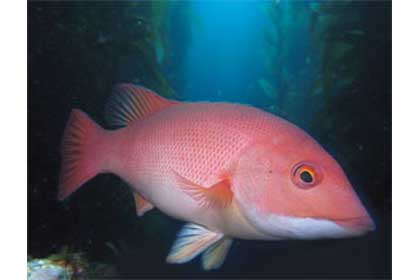 We’d already made two great dives along the west end of Catalina and our group was admittedly a little tired, but when offered the chance to make a third dive at Doctor’s Cove we all jumped at the chance.

Why? Because a dive at Doctor’s Cove is a rare treat. The reefs surrounding Emerald Bay’s Indian Rock are known for lush kelp beds rich with sea life and excellent visibility, and as a result, Doctor’s Cove is often overlooked. That’s too bad, especially since it’s sporting a shipwreck. Lying on her port side at a depth of about 55 feet is the 40-foot sailboat, Extreme Snailing, which sank during a storm in May of 2011. The wreck has already collected a substantial amount of growth. Her mast and rigging are still intact and the cabin is open for exploration. It’s a tight fit, so use caution. Bring a light if you want to peek inside.
Only a few small calico bass have taken up residence but there is a resident population of lobster wedged under the hull and a few in the interior. Look but don’t touch, as this area of the island is part of a marine preserve that protects marine invertebrates.
Off the bow is a small but healthy forest of elk kelp (Pelagophycus porra), which is not uncommon but is usually found only in deeper water. Macrocystis kelp has many small air bladders (pneumatocysts), but elk kelp has one air bladder about the size of a baseball or softball. Extending from each large pneumatocyst are branches and long, wide fronds to capture the sunlight. Under the canopy that hangs just a few feet off the bottom it is not unusual to find rockfish, halibut and even lobster.
Head slightly westward up the slope toward shore and you’ll find the delightful patch reefs of Doctor’s Cove. Several rocky outcroppings extend five to 10 feet from the bottom, with plenty of nooks and crannies that serve as condos and townhomes to a wide variety of marine life. You can find horn sharks wedged in some of the deeper crevices. Dotting the reef are ghost gobies and the brightly colored blue-banded gobies. Reef fish taking up residence here include small sheephead and calico bass as well as a number of colorful garibaldi. Small schools of fish circle through the lush kelp with opaleyes being especially abundant. Toward the cove on the sandy bottom large leopard sharks move in during the summer, as do big bat rays.
This was my first dive at Doctor’s Cove since the sunken sailboat came to rest here. It was like icing on the cake of patch reefs and a rich kelp forest ‚äî it shows that you never know what delightful surprise awaits you on your next Catalina Island dive.
The author wishes to thank Carter Crary of Malibu Divers for providing information about the wreck.
At-A-Glance
Location: Mainland side of Catalina Island just northwest of Emerald Bay. GPS N33° 28.26′, W118° 31.878′
Skill level: All, but stay out of small interior of wreck unless properly trained.
Diving depths: 20 to 55 feet.
Visibility: Good, averaging 30 to 50 feet.
Access: Boat only unless you have access to Boy Scout Camp onshore in which case you can dive it from shore or kayak.
Hunting: Not legal to take invertebrates including lobster and scallops. Spearfishing poor to fair for a few  calico bass or halibut.
Photography: Interesting  wide-angle material on wreck or in lush kelp forests or on sand flats for sharks  and rays. Fair for macro on reefs.
← Previous Post
Next Post →