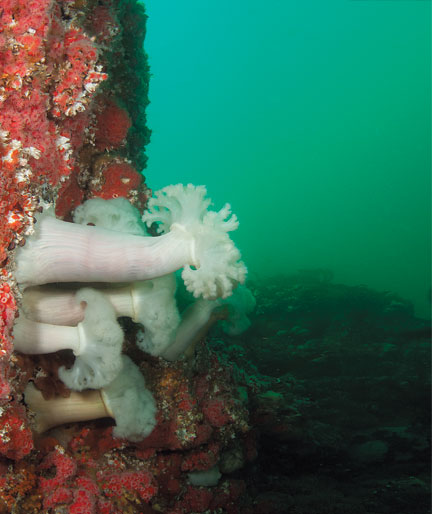 Most of us tend to reflect on the “good old days” with a great deal of fondness. I suspect this is true mostly because we tend to forget the tough parts. In the “good old days” (when I was younger, stronger, and poorer) we would dive Point Lobos from the ramp, and swim all the way around the corner into Bluefish Cove. Later, I had access to a small inflatable boat, and traded long swims for time spent prepping and cleaning the boat. These days, things have gotten a lot easier. One Monterey Charter boat, the Beachhopper II, runs once-a-month trips to the Point Lobos Natural Reserve, and let me tell you this is the easiest way to dive the reserve. On a recent trip we got a spectacular dive in at the Great Pinnacle.

The Great Pinnacle is found off Bluefish Cove and is composed of two major pinnacles and several spurs. The two, larger structures are separated by a narrow, steep-sided canyon. The high point begins at 40 feet in a rounded top, and rolls over to steep walls on all sides. Between the pinnacles there is a sand-bottomed canyon at about 90 feet that winds down to a sand fall. The north side of the pinnacle drops steeply to a nearly vertical wall. On one dive we followed the wall down to well over 100 feet, and the pinnacle continued to drop vertically as far as we could see in the extremely clear water. Because of the access to extreme depths this is an advanced dive. The south side drops only to about 70 feet.

The enormity of this pinnacle is breathtaking. Gliding along such a magnificent structure is like flying among the highest peaks in our Sierra Nevada Mountains, and is as close as most of us will get to flying. Diving here is a special experience, particularly when the visibility is good.

In addition to the grandeur of the geology there is quite a lot of life here. As we descended to check out the anchor we looked for Victor, an enormous, male sheephead, who has taken up residence here. All sheephead are born female and some transition to male. Hence, Victor was named after the movie, “Victor/Victoria.” Victor was not out this day; we were, however, greeted by three, very friendly and photogenic vermillion rockfish. These brightly colored fish are one of the prettiest on our Central California reefs, and these seemed to be as curious of us as we were of them. There were also a few other rockfish tucked in the cracks in the wall.

The shallow areas of the pinnacle are covered with a few stalks of palm kelp, and these give way to beds of strawberry anemones, solitary stony corals, rock scallops, and encrusting sponges. These are very colorful and make nice backdrops for macro photography. Seems that every square inch of rock is covered with something alive, and each has its own way of preserving its “space.” Cup corals, for instance have stinging cells that keep near by sponges from getting too close.

The deeper wall is smooth in some places and has deep cracks with barb-like structures in other areas.  Here are found a few, but enormous, giant white-plumed anemones. These were about three feet tall, and have the largest polyps of any Cnidaria. There are also a handful of rockfish in the cracks and fissures of the rock.

Diving within the Point Lobos State Natural Reserve is limited to 15 teams of two divers per day. Reservations for diving are encouraged and may be obtained online up to three months in advance at: https://www.parks.ca.gov/?page_id=28353. The park opens at 8 am, closes at sunset, and diving is restricted to Whalers and Bluefish Coves. A more complete set of regulations may be found at the link above.

This pinnacle is somewhat exposed and it is not accessible every day. On those special days when the sea allows the Great Pinnacle is still undeniably one of the best wall dives in Monterey County.

Access: Divers must enter the reserve through the main gate and check in, and may only enter the water at the boat ramp in Whalers Cove.

Entry and Exit: It’s a long swim around the corner from Whalers Cove to the Great Pinnacle, and a boat or kayak is normally required.

Photography: Great for both wide-angle and macro

The author would like to thank Captains Brian and MaryJo Nelson of the Beachhopper II for their help in the preparation of this article.