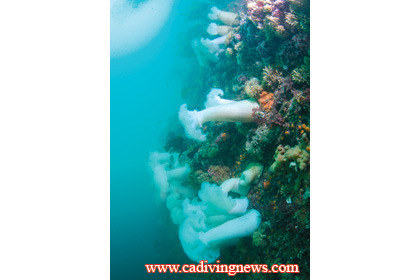 California has been my primary dive destination since 1973, and I’ve made more than 1,000 dives off its coast. Yet until last September I’d never been north of San Miguel Island. Why? Because I’m a wetsuit user and thought the water would be too cold. It should be no surprise it’s not warm, but on our four-day Big Sur trip last September, it ranged from 54 to 58°F — five to ten degrees warmer than I expected.

Truth Aquatics runs Big Sur trips in June and September. The Vision moves to Morro Bay and divers board it there. For me that meant an easy 45-minute drive from Santa Maria.

We left the dock at 3:30 am on a Friday. It was a smooth ride and I slept soundly.

We awoke to overcast skies. The sun came out in the afternoon but it dropped into the sea at sunset and we didn’t see it again until the last day of our trip. In between, the fog was so thick that only a few feet of the coastline — or none at all — was visible above the water.

Many sites featured both giant kelp and bull kelp. According to one of my reference books, bull kelp “flourishes in exposed turbulent areas.” This is an apt description of the Big Sur coastline, which some call “The Big Surge.” The diving includes offshore pinnacles and seamounts but even the shallow sites are challenging. There were long rolling swells and surge below 70 feet on our trip.

At most sites all but the upper most blades of giant kelp had been stripped away by the water movement, leaving only stipes, bladders and a few shredded blades. The stipes were often twisted together, forming a strong, living rope.

Lion’s mane and fried egg jellyfish were seen on nearly every site, usually drifting rapidly by on surface currents. The fried egg jelly has only a mild sting but that of the lion’s mane is said to be unpleasant. Keep an eye out for them when you are ascending so you don’t run into one accidentally, as I did. Though it was a fried egg jelly and I barely felt its sting, it left slimy Silly String like tentacles on my gear and me.

The surge keeps the bottom stirred up, but even without it visibility would be limited because there is so much “stuff” in the water. Safety stops were fascinating. All sorts of tiny, transparent life — in an infinite variety of shapes — drifted by. I expect this gelatinous zooplankton included salps and ctenophores, along with larvae of numerous species.

The invertebrate life on Big Sur sites is similar to that found on Wilson and Richardson Rocks (off San Miguel Island). Strawberry anemones, along with orange cup corals and sponges and tunicates in a variety of colors, covered nearly every surface. Hidden among them were small crabs — but often all you saw of them were their claws. White spotted rose anemones were ubiquitous. One diver photographed a wolf eel but those who scoured the site for it after him were unsuccessful. Small juvenile rockfish were common. There were groups of large yellow nudibranchs (Anisodoris) mating and laying eggs.

The deep sites featured white-plumed anemones and hydrocorals. Because of strong currents and poor visibility we did not dive Schmieder Bank, notable for its exceptionally large, pristine hydrocorals.

At Partington Point (one of the shallow sites), the rocks were covered with crustaceans that I think were sharpnose crabs. At one point I put a finger on a nearby rock to steady myself and the surface moved. It was covered with these hairy looking, knobby crabs.

At Bonnie’s Rock (guess who suggested the name?) I photographed the very first school of tubesnouts I have ever seen. These tiny little fish resemble pipefish. Alas, the water was too full of “stuff” for a good shot.

Our last dive was at Jade Cove. Many braved the considerable surge in the shallows to look for jade — and some found it. Those who were successful sifted through the pebbles on the bottom. (If you wondered, jade looks green in and out of the water.)

I didn’t realize what was missing from Big Sur diving until I looked at my photos. While I saw bottom dwelling fish, the tubesnouts were the only schooling fish I encountered. According to Mary Patyten of the California Department of Fish and Game, “Most divers will notice fewer fish on rough, surgy days. Visibility is usually poor at the same time but most biologists I know are convinced the fish have moved elsewhere. They likely seek refuge in deeper water or in cracks and crevices when the ocean is rough… It even seems to last until a couple days after the swell has dropped. That’s one of the reasons scuba surveys for fishes are scheduled during the summer when ocean conditions are calmest.”

Though you can dive Big Sur in a wetsuit, dry suits are recommended. A surface signaling device is advisable. This diving is for experienced divers only.

The ever present fog makes it damp and chilly topside. Bring warm clothes for the galley and deck (and if you get a sunny day, enjoy it). A boat coat was great over my wetsuit during the day but my zip-up microfleece sweater didn’t keep me warm après-dive. Next time I’ll bring a jacket, a hat and wool knee socks.