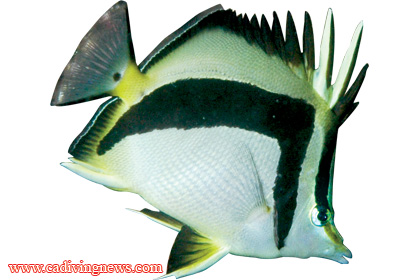 A lot of times when folks dive Catalina, they go to the “usual spots” like Isthmus Reef, Ship & Bird Rock, Eagle Reef, or Indian Rock. But there are other great spots as well that don’t see divers on a regular basis. One such location is Crane Point, south-ish (to the left as you’re looking at the island from the water) from Blue Cavern and Sea Fan Grotto. It features a large platform that used to house a quarry crane and from where the site gets its name.

Along with the sea life, Crane Point makes for a great dive site as it’s generally protected from current and wind. There’s pretty good anchorage, and you can dive it deep or shallow. On Reef Seekers trips when we’re in that area, we’ll frequently use Crane Point as our afternoon spot for all of those reasons.

The general configuration of the site is almost like there was a landslide that left a sloping field of boulders—of all sizes—and then the fish moved in. This all terminates at the sand around a depth of 60 feet, and then the sand bottom slopes out to deeper water.

One thing you will almost always see here are large schools of fish, frequently blacksmiths or small sardines. A year ago, CDN editor Dale Sheckler and I were diving Crane and were mesmerized by an enormous school of Jack mackerel that had to be at least 10,000 strong, and who engulfed us for a good 10-15 minutes in about 15 feet of water. With the afternoon sun filtering down through the kelp and the swirling fish, it made for quite a sight.

The kelp here is usually very healthy, so it really encourages fish to stay in the area, as well as providing a really great third-dimension to your dive. You’ll generally find numerous sheephead in the area (adults and juvies), and there are always garibaldi. During mating season, you’ll see a number of garibaldi nests, because the configuration of the rocks and boulders makes for good nesting sites. Look for large patches of red algae that have been cultivated by the male, and if you see a patch of orange in the middle of the red, those are the fertilized eggs. (And remember, the male will vigorously defend his nest, so don’t spend too much time up close.)

But the icing on the cake at Crane Point is that it’s one of the few places in Southern California where you can reliably find scythe butterfly. It is presumed that these normally semi-tropical fish rode north on an El Niño current in the 80s or 90s and settled in at Catalina. Over the years, they’ve adapted to our colder waters. I’ve seen as many as six at one time. But they’re elusive, shy, quick, and hard to photograph. You’ll generally find the scythe in 25-35 feet of water. If there’s a slight thermocline, they’ll be in the warmer water. They’ll come out in the open, but only briefly. They love hanging around the boulders because the rocks not only offer them protection, but they can also scoot behind and between rocks and make their way down the reef without being too exposed.

The trick to finding them is to move slowly along and keep peering in every crack and crevice. And every now and then, look ahead of you and behind you because sometimes they’ll show themselves when they either sense your approach and when they feel you’ve passed them by. Once you spot one, the chase is on. Keep an eye on the fish, and—even if it ducks behind the rocks—follow the anticipated path. If you move slowly enough (and guess right), eventually you and the scythe will come eye-to-eye and there will usually be a moment when the scythe will stop to size you up. If you’ve got a camera, that’s your best chance. If you’re a looky-loo, enjoy the sighting of a rare California fish.

Give Crane Point a shot sometime. With good protection, frequently good conditions, and the chance of seeing a scythe butterfly, how can you go wrong?