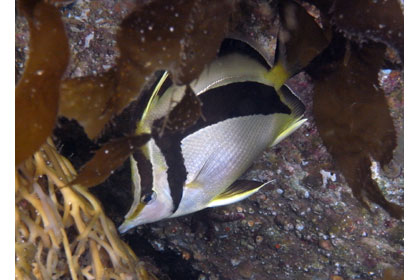 Much of Southern California diving is considered temperate with Catalina surface water temperatures topping out at 70 degrees Fahrenheit mid-summer and falling to the high 50s F in the winter. They’d hardly be considered “tropical” yet the area is home to butterflyfish. If you look in the right spot they are not hard to find. And that right spot is Crane Point in the Rock Quarry area on Catalina Island.

It is believed the Scythe butterflyfish first appeared at this location during the El Niño event in 1983, when changes in currents off the equatorial region of the Pacific Coast of South America caused a dramatic rise in sea surface temperatures off the California coast. The event caused a massive die-off of kelp beds. It also brought non-native species up from the south, including puffers, tiny arrow crabs, cardinalfish, triggerfish and the scythe butterflyfish. Most butterflyfish tend to prefer warmer waters, but the scythe tends to prefer cooler waters, which might help explain why this species seems to be right at home here.
The scythe butterflyfish (prognathodes falcifer) is about six inches long, bright yellow in color with a black scythe-like marking across the body. It has a long snout, perfect for reaching into small crevices on the rocks to feed on tiny invertebrates.
The colony of butterfly fish here is small. Most divers see only two or three at a time but there are reports of as many as a half dozen. Almost all of them are concentrated in a small area just 50 yards east from the location known as Crane Point.
This was once a rock quarry that, along with the quarry on the east end, supplied the mainland with material for its breakwaters, harbor construction and, decades ago, a few coastal artificial reefs. Now only the east end quarry is active. Crane Point at this quarry is the small rock protrusion into the kelp. It is here that the quarry’s crane use to be perched, hence the name. The actually rock quarry extends far to the east.
The butterflyfish reside almost exclusively in 30 to 40 feet of water. They are easy to spot with their distinctive black markings with yellow accents. If you want to get a good look‚äîor the chance of a photo op‚äîmove slowly and carefully, as they spook easily.
Sighting the scythe butterflyfish isn’t the only reason to dive here. The Rock Quarry has long been a very fishy dive. Large groupings of blacksmith reside here and big schools of anchovies frequently pass through. Their predator, the yellowtail, is often seen on the outer kelp forest fringes. Giant black sea bass are sometimes seen here during the summer. On our most recent dive, juvenile garibaldi and small baby sheephead seemed especially abundant.
Speaking of sheephead, the big tri-colored males are back. In 2010 this dive site became part of the Blue Cavern State Marine Conservation Area. Hunting is not allowed. As a result, this once depleted species is making a comeback. To attract the larger sheephead and other reef fishes, bang or rub rocks together and they’ll come running.
In my search for the butterflyfish I found other treasures hiding in the rock crevices. The semi-friendly lobsters here are fun to watch. None are big but it does not matter, they will grow up. Remember, this is a conservation area. No hunting. Here and there you might spot an abalone. If you spot one, try offering it a sprig of kelp. You might be surprised when it reaches out to grab the kelp from you!
At-A-Glance
Location: Just east of Blue Cavern Point and a very short distance from the popular dive site known as Sea Fan Grotto.
Skill Level: All levels.
Diving depths: 10 to 70 feet.
Visibility: Excellent, averaging 50 feet or better.
Access: Boat only. Several dive charter boats operating out of San Pedro and Long Beach and boats from Ventura and Santa Barbara often visit on multi-day dive trips. Private boat ramps in San Pedro and Long Beach harbors.
Conditions: Currents common but rarely overwhelming.
Hunting: None. This location falls within the Blue Cavern State Marine Conservation Area
Photography: Excellent with kelp vistas with schools of fish and garibaldis (and giant black sea bass in summer). Macro is good for gobies and other small reef creatures.
← Previous Post
Next Post →