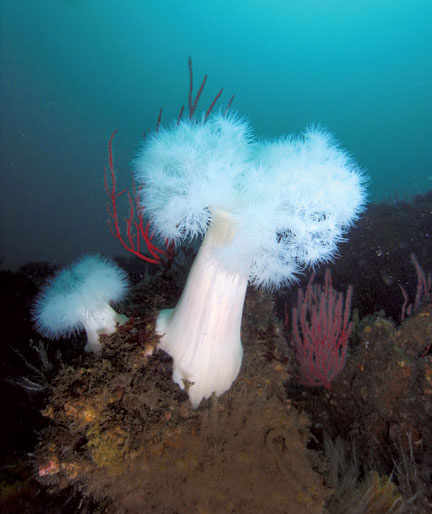 Entry and Exit: Can be tough in open water location open to shipping and small boat traffic.

Conditions: Poor to occasionally good. Often surge from even moderate swell in its open location.

Visibility: Averages 5 to 10 feet, best in the fall and during calm seas and slack tide.

Photography: Macro good with lots of subject material but silt can be a problem.

Restrictions: By law nothing can be taken from a wreck as they are considered archeological sites.

I never have met a diver that didn’t at least entertain the fantasy of finding treasure while diving a shipwreck. While few wrecks along the California coastline offer the prospect, the Gambler wreck, the Monfalcone, is a wreck that might actually yield sunken treasure.

When it launched from Orange, Texas in 1919, the Monfalcone was meant to be one of the finest sailing vessels on sea. However, the massive 282-foot, five-masted Barquentine schooner arrived late in the game, just as the steam engine was taking the wind out of sailing ships’ sails.

More bad timing dogged her. On her westward journey to the Pacific she sailed straight into a hurricane and was stripped of her rigging. Salvors bought the Monfalcone for a paltry $5,250 and put her back into service. While she did enjoy a brief movie career, eventually she fell into lack of use because steamers took over the market. She was then reduced to a lowly fishing barge.

The Monfalcone got another shot at glory when in 1928 she was put to use as a floating casino and dance hall, but her operators reportedly had frequent run-ins with the law.

On August 31, 1930 she caught fire and sank the next morning to the bottom, 75 feet below. While all 300 onboard escaped unharmed, several of the dealers responsible for securing the casino’s cash in the safes panicked. At the time of the sinking $25,000 was said to be in play. Salvage divers were immediately dispatched to search the wreckage. One safe was found with $3,000 in it and another with the door open, empty. Approximately $11,000 was never found.

This is not a frequently dived site so you may still have a chance of finding the treasure. The location, however, lies within active shipping lanes and small boat traffic is heavy. It is popular with sport fishing enthusiasts as well. Carry a sharp knife or shears to extricate yourself if necessary.

Adding to the difficulty of diving this location, visibility is often poor, averaging 5 feet. The first time I dived this wreck I did not see it until I ran into it. The second time we enjoyed 30 to 40 foot of viz! You just have to hit it on the right day. To increase your luck avoid days of heavy swell and dive the site at slack tide.

Sure you can poke around for the missing treasure but much of the booty lies in the life on the wreck. Perhaps what will take your breath away will be the number and variety of nudibranchs. I especially loved the number of snow-white tritonid nudibranchs, which seem to be everywhere.

Giant white-plumed anemones dot the tops of the wreckage and huge sand rose anemones are scattered around on the silt and sand bottom. Gold and red gorgonian sway in the surge and reef fish dart across the wreckage. Scorpionfish and small lingcod can be seen, too.

Larger fish include calico bass and sheephead but because this location is so heavily fished don’t expect big numbers. Even so, schools of blacksmith are prolific.

The debris on the bottom is basically a jumbled mess. It really does not look much like a ship. Because the vessel was made of oak much of the hull still exists. Iron and steel clumps are here and there. The main wreckage rises not quite 10 feet off the bottom.

The real treasure of a sunken wreck like the Monfalcone is learning its history as you dive it, and seeing how nature is reclaiming the oak with it own special decorations.

The authors wish to thank the California Wreck Divers club (cawreckdivers.org) and Sundiver Express (sundiverinternational.com) for their help with this article.