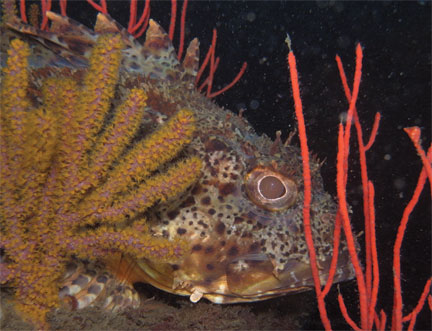 Location: Water entry at several locations but the most frequently used is at Vallecitos Street south of the lifeguard tower at the south end of Kellogg Park off La Jolla shores.

Depth Range: 10 to 50 feet along the sand flats then stair step down or steep drop, depending on location, to over sport diving limits.

Photography: Excellent for macro in all sections. Wide-angle only fair.

Hunting: Matlahuayl State Marine Reserve. Nothing can be taken or disturbed.

Seeing Earth from space it is obvious that the Pacific Ocean is massive. As divers we are privileged to have the ability to explore it, even if only in just a minuscule way.

It is easy to think that if we’re beach diving off southern California that we are even more limited in our exploration of the depths but that is not entirely true. Discovering and diving a submarine canyon, right off our coast within swimming range, you have the opportunity to go deeper and in a more exciting way.

The vast majority of California’s coast is a gradual slope into the the fringes of the sport diving limit where you will find odd geological features known as submarine canyons.

There are five of these formations off southern California that come close to shore. They are, from north to south: Hueneme, Dume, Redondo, Newport and La Jolla. The most accessible are Redondo with its steep slope, Newport off the Newport Pier with its gentle stair steps, and La Jolla which is considered the best diving of all with easy access, usually good conditions, generally easy entries and exits, and, best of all, steep drop offs with many environs choc full of marine life.

From the lip of the canyon, in approximately 45 feet of water, the bottom drops away rapidly to over 200 feet. Less than a mile from shore, the canyon is 700 feet deep.

The face of the canyon off La Jolla Shores is large, and there are several sections to explore. Probably the most popular section with the best facilities and shortest swim to the canyon edge is at the south end of Kellogg Park at Vallecitos Street. Just to the north is a large lifeguard tower that is manned year round 9 a.m. to dusk and posts ocean conditions daily. To the north of the main tower is the surfing area; diving here is discouraged.

Out from Vallecitos Street the sand bottom slopes moderately. You’ll want to head directly out about 250 yards. This will place you just inshore from the rim of the canyon in about 40 feet of water.

The canyon here drops from approximately 45 feet in a series of ledges that vary in height from 10 to 20 feet. The bottom drops off rapidly to over 200 feet. Visibility averages around 15 to 20 feet but can drop severely with heavy surf or plankton blooms. 30-foot visibility occurs when upwelling from the canyon is present.

Head north along the canyon face and you will find it turning out to sea then back into shore in a peninsula-type formation. Look for deep caves and undercuts on the far side of the peninsula.

Going south along the canyon wall gives you a completely different dive. Here the face is steeper. There is a prominent shelf at 100 feet.

The structures of the canyon walls are also dynamic. Several winters ago a big storm caused a large section of one of the ledges to collapse into a heap of boulders.

Upwellings can bring deepwater species near the rim for observation. One of these visitors is squid, found in late fall through early spring. The massive nighttime spawns of these animals are not to be missed. The squid in turn attract other larger fish. It is a riot of marine life.

On the clay canyon walls, several varieties of small colorful fish make their home. In the crevices and overhangs are sculpins, gobies, blennies, island kelpfish, painted greenlings, and other small bottom-dwelling fish. Bigger bottom dwelling fish are here too. Male cabezon can be seen guarding their nests. Spotted bass like the upper lip of the drop offs as do the occasional sheephead.

Pelagics can often be observed here, so be sure to look out to sea when you get a chance. Massive shoals of bait fish have been known to storm the area.

Stands of red gorgonian are attached to the ledges below 65 feet, with crab and octopus making their homes in the holes in the clay walls. Some of the deeper crevices hold large populations of lobster. This entire area is an underwater park and ecological reserve though, so nothing is to be taken or disturbed.

As you head back to shore take time to skim over the sand flats. Keep an eye out for big halibut often hiding half buried in the sand. Rays are common as well including bat rays, thornbacks and the round stingray.

Thanks to the offshore deepwater canyon, surf is generally smaller here than at other locations along the San Diego County coastline. The facilities are excellent with restrooms, showers, a child’s playground, and plenty of free parking. Because of these amenities, and the fact that it is just a darn pretty beach, the parking is packed during pleasant days year round. Arrive early.

In spite of the fact that classes often use the site, it’s a dive for both the novice and experienced. It really depends on just how extensively you want to explore this fantastic underwater feature.