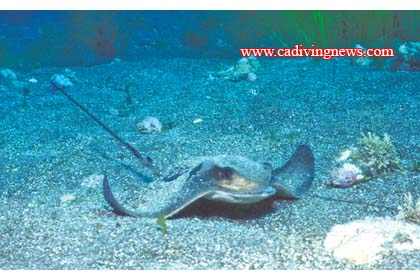 Even after decades of diving, most of it in California, there is still quite a few local marine animals I haven’t seen underwater. A mola-mola, for instance. A soupin shark for another. I could go on, but it makes me grouchy. How is it fair that other, less experienced divers have seen what I haven’t?
One fish that is no longer on my unseen/unphotographed list, however, is the leopard shark. I encountered five last summer (or perhaps it was one animal five times) in San Clemente’s Bat Ray Cove. The only reason I saw them at all was because Conception owner/captain Glen Fritzler said they’d been there the previous week.
While leopard sharks are not rare, divers rarely see them because they are very shy and stealthy. Ditto soupfins. (Note: Neither shark has ever been known to attack humans.) To have a better chance of not spooking them, I left my tank onboard and went snorkeling.
Since these sharks prefer shallow water, I headed for rocky shoreline. We had a beautiful sunny day with flat water. I saw a bat ray resting in the sand about 20 feet below me. I saw several divers taking photos. I saw garibaldi flitting here and there. And just when I thought the leopards had left, I spied one cruising effortlessly below me. The big fish must have known I was there but it didn’t react, it just continued on its leisurely way.
Invigorated, I continued my quest and was rewarded with four more sightings. Each shark seemed to come out of nowhere, its coloration providing very effective camouflage. The animals paid me no mind whatsoever.
When I returned to the Conception I found out that if I’d just gone a little farther along the coast I would have seen some soupfins, too. They had gathered just around the jagged outcropping where I turned back.
Leopard sharks can reach six feet in length but five feet is more common. They have sharp, three-pointed teeth and their favorite foods are crabs, shrimp, bony fish, fish eggs, clam necks and innkeeper worms (something else I’ve never seen). Leopards are ovoviviparous–the young develop in eggs inside the female and are born live after they hatch.
Bat Ray provides perfect conditions for leopards and soupfins. It is one of several coves on the northeast end of San Clemente that share calm, shallow water leading to a drop-off, the top of which features a thick kelp forest.
The drop-off is an interesting dive, with cracks and crevices that host moray eels and lobster. When there’s little or no surge, however, the shoreline is even better. There the land drops precipitously into the sea forming two wide, shallow ledges. The first is a continuation of the topside topography except palm kelp and sea grasses cover the rocks, providing a great habitat for lobsters, horn sharks, calico bass and garibaldi.
The second ledge is sand, dotted with rocks and patches of sea grasses. Here is where you’ll have the best chance of seeing bat rays.
I’m planning a late summer trip to San Clemente Island again this year. Here’s hoping leopards and soupfins have, too.
Bonnie J. Cardone has been diving for 37 years. The former editor of Skin Diver Magazine, she is now a freelance photojournalist and the author of several unpublished mystery novels. She is a recipient of the California Scuba Service Award and a NOGI for the Arts and a member of The Women Divers Hall of Fame and the California Wreck Divers Hall of Fame.
← Previous Post
Next Post →