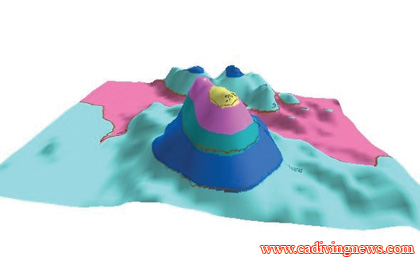 There was a bit of a plankton bloom that day, but only within the upper 20 or 30 feet. As we followed the anchor line down and popped out of the turbid layer, a brilliant red dome of strawberry anemones appeared, framed in a luminous white ring of Metridium anemones. The clarity of the water was excellent, and the shape and color reminded me of a red ruby set in white gold–simply magnificent.

Ball-Buster is an offshore pinnacle a bit off the beaten path in Monterey. It is about two-thirds of a mile off the Coral Street entry and is only divable from a boat. This site’s name derives from the large number of 50-pound lead balls found here–artifacts from commercial fishing gear that got snagged on the rocks. Although some claim a Monterey diver named it after his first wife, attesting to the difficulty of dealing with both his wife and the site.

This is a relatively small site, perhaps 30 by 50 yards. The top of the pinnacle begins at about 72 feet. This shallow area is covered in red strawberry anemones in a thick carpet. Among the anemones are an assortment of barnacles, nudibranchs and stony corals. The pinnacle is often in a swift current and it attracts a lot of pelagic and schooling fish. It is common to have thick schools of blue rockfish circling the site. On this particular dive we saw a number of Mola mola hanging out.

In some areas the pinnacle drops off steeply in a nearly sheer, but deeply cracked, rock face. In other areas the rock drops away in a series of giant steps. The deeper steps are covered with a field of fluffy white Metridium anemones. Look for small fish, nudibranchs, shrimp and crabs in the cracks. At the bottom, a bit away from the rock, on the southeast side is a nice patch of red gorgonians. Gorgonians are not that common in Monterey at recreational diving depths, so these are a real treat. Look for simnia shells, festive tritons, and slender shrimp on the gorgonians. These critters are normally found on the gorgonians whose polyps are retracted, since many of these feed on polyps and gorgonians protect themselves by retracting their polyps.

On the southwest side of the pinnacle is a deep vertical crack, partially blocked by a large boulder, whose bottom begins about 10 feet off the bottom. On this day there was a giant (and I do mean giant) pacific octopus hiding well back in the crack. The brute did not want to come out and play, kept too far back into the crack for a good photograph, but it was inspiring to watch as it watched us with its enormous eye. It had to be over eight feet long! Rumor has it that a wolf eel has also been spotted in that crack.

The site is compact enough to see the whole thing on a single dive, but has enough interesting critters to keep coming back again and again. However, this is not a beginner site due to the depth, frequent strong to moderate currents, its presence in a heavily traveled boat lane, and distance from shore. Good navigation, buoyancy control, and skills to descend and ascend an anchor line are critical to safe diving here. This site is best done from one of Monterey’s charter boats. That said, this is one of the best dives in the bay and is well worth the trip. All of the skippers on the local charter boats have experience diving this site.

Dive Spot At A Glance
Location: About two-thirds of a mile northeast of Coral Street entry in Monterey Bay.
Access and Entry: This site is only accessible by boat. Since there are no lineups you must use GPS to find this site. The high point is at N 36° 38.488′ W121° 55.169, but don’t anchor there as not to tear up the fragile invertebrates. There are two good spots to anchor: at the southeast side of the rock N36 38.483 W121° 55.159′ and at N36° 38.504′ W121° 55.158′. The latter is preferred in a south wind unless someone is anchored at the former site. You will need to put out a lot of scope. Monterey’s charter dive boats frequent this site. (GPS and history courtesy of Chuck Tribolet)
Skill level: This is an advanced dive. While most of the dive would normally be considered advanced intermediate, the surface conditions raise the level to advanced. You should plan for a stiff current here and almost always a steady flow of boat traffic. To safely dive this site you MUST be able to descend down the anchor line, find the anchor at the end of the dive, and ascend back up the line. Owners of private boats should have some experience in Monterey before attempting this site.
Depths: 72 to 105 feet
Visibility: Generally good, 30 to 60 feet, occasionally near 90
Photography: Great place to photograph nudibranchs and other invertebrates, Metridium anemones, giant Pacific octopus, schooling fish, and wide-angle images.
Hunting: The high point is just outside of the Pacific Grove Gardens State Marine Conservation Area where only finfish may be taken. It is so close to the boundary of the reserve, and such a special site, that I strongly suggest not taking any game here.
Hazards: Plan on a strong to moderate current here. Be very careful diving here since you are in the middle of a heavily traveled boat lane.
For Dive Charter Boats in the Area:
www.montereydiveboats.com