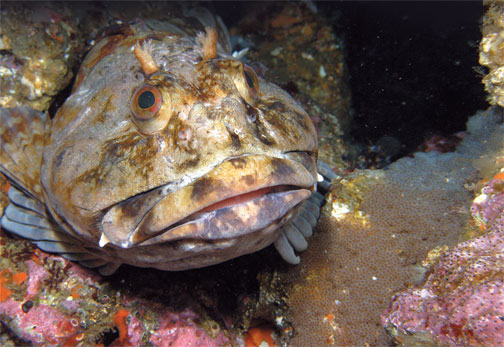 Location: Approximately 1 mile offshore of Point Loma running parallel to the shore. Easy to spot on depth finder. Generally along the seaward edge of the kelp forest. Directly west of the Cabrillo Light House has some excellent walls, even deep cracks and crevices.

Entry and Exit: Boats only but heavy swell can sometimes affect the area.

Conditions: Surge in the shallows. Currents.

Hunting: Lobster in the right spots. Decent spearfishing. Be careful to remain outside Cabrillo State Marine Reserve, as this area is closed to hunting.

At the time of the last Ice Age the ocean level along the San Diego Coastline was much lower than it is today. Just as today, the surf pounded that ancient coastline, eroding the shoreline, eating away at the sandstone, creating cliffs where waves broke against the mainland. When the sea level rose over 100 feet, those cliffs remained and became submerged. Today these ancient sandstone sea cliffs are one of the more spectacular dives along the Southern California coastline.

The Point Loma kelp beds are some the largest and healthiest in the state. But they end abruptly at the edge of these submarine cliffs. The cliff tops out as shallow as 65 feet, but in most places starts in 75 to 80 feet of water. Thick kelp grows right up to the edge before it drops away. In some spots the drop is vertical as much as 30 feet. Rocky fingers, undercuts, and shelves jut out from the lip of the wall. In other locations ledges and undercuts have collapsed into a jumble of rocks and boulders that are an excellent habitat for numerous fish species and other creatures.

Cold upwelling currents feed the marine life that attaches to these rocks. Corynactis anemones seem to be the most abundant life form. They come in patches of yellow, pink, lavender, and red. Intermingling with these clumps of finger-sized anemones are bright orange blood stars, oddly textured leatherback stars, and the massive multi-armed sun stars. Filter feeding rock scallops are abundant as are feather duster worms and gorgonians, both of the red and gold variety.

The rock face bottoms out at 100 to 115 feet in a jumble of boulders, then sand. The rock ledges at the top and jumbo boulders at the bottom often house lobsters. Bottom dwelling fish include abundant rockfish and lingcod.

Being on the edge of a lush kelp forest, you have an intermingling of environments. With deep open ocean beyond, it’s not unusual to see large pelagics cruising past. It is especially fun when you see the occasional small school of barracuda and its predator, the protected black sea bass or its relative, the uncommon broomtail grouper.

White sea bass are often hiding in the kelp near the edges. You have to be an excellent free diver to see and perhaps spear one of these fish. Especially lucky divers might see a seven-gill shark here. These guys can reach 6 to 7 feet in length! More seven-gill sharks have been seen here than any other place along the southern California coast and islands.

Up among the kelp fronds you will find the usual entourage of calico bass (some quite fat), kelp rockfish, halfmoons, and blacksmith fish. The rock floor under the kelp near the cliff is barren compared to the cliff edge itself. Scattered throughout the inside of the kelp forest are, however, a number of interesting reefs that are appropriate for a shallower dive following the deep dive on the cliff. These shallower reef structures include New Hope Rock with its excellent rock formations and Horse head Reef with fun ledges and good lobster hunting.

Water conditions at the submerged cliffs are generally good because of its open ocean location. Visibility averages 30 feet but often can be reduced dramatically by plankton blooms from the coldwater upwelling. Surge is generally not a problem due to the depths. Strong currents can occasionally come up but are usually not a serious problem, especially for the experienced diver.

The best way to dive the Sea Cliffs off Point Loma are from one of many charter boats that run out of the San Diego area. While several of the sections of the Sea Cliffs are quite spectacular, other sections are more mundane. An experienced charter boat captain will be able to put you in the most desirable locations. Dive-charter boats run from Mission Bay to the north, with most run times averaging about 30 minutes. Private boats can also be launched from ramps in Mission Bay and San Diego harbors.