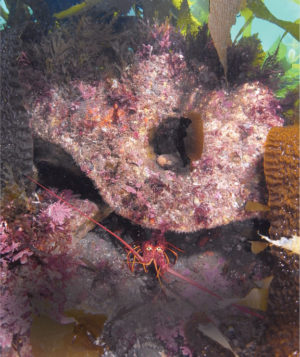 By 1853 the California Gold Rush was well underway, with commerce up and down the coast at full speed. On December 1, 1853, the side-wheel steamer Winfield Scott, loaded with cargo and with 450 passengers onboard, ran aground on a rocky reef off Anacapa Island. The ship and practically all its cargo were lost, but thankfully the passengers and crew survived.

Today not much remains of the vessel but even so the chunks of wreckage make for interesting exploration. Gold coins have been found here. But don’t get too excited. First, there were very few to begin with. Second, it has been a long time since any have shown up. And finally, in the highly unlikely event you see one, do not touch it. The wreck falls within the Channel Islands National Park and is considered an archeological site. To disturb or take anything from this location carries stiff fines and possible jail time.

What you are much more likely to find than gold are chucks of brass. These were not only part of the machinery but also large bars were used to hold the ship together. Brass is an alloy of zinc and copper and corrodes slowly. As copper oxidizes in the seawater the metal turns green making it easier to spot. Copper sheeting was also used on portions of the hull. Iron was used in the machinery but it corrodes quickly, usually turning into a black oxidized mush after just a few decades under seawater.

Much of the time the wreck site is covered in thick kelp, making the wreckage hard to distinguish from the reef. Although the recent warm water El Niño all but wiped out the kelp cover, the invasive algae Sargassum horneri has moved in to replace it in large mats also obscuring the larger chucks of wreckage. But look carefully and you will still find enough to make it interesting.

The wreckage is scattered over a large area from about 30 feet to as shallow as 10 but with the larger chunks being at about 20 to 25 feet.

Because this is a shallow dive and bottom times will likely be long, take the time to visit the cavern at the site know as Wizard Hat just a few yards to the east. Wizard Hat gets it’s name from the large pointy rock’s pinnacle surface appearance. Just below the surface running approximately in an east-west direction is a short cavern pass-through leading from one side to the next. Most of the cavern is open to the surface above and you can easily see from one end to the other. It can usually be explored safely, but watch out for the surge.

Also take time to explore the reef surrounding and out from the Wizard Hat. This is where you will find the most marine life of the dive. Look for kelp fish trying to blend into the sargassum. Medium to large horn sharks like to hang out here. You’ll likely find lobsters here, including some large ones. Look, but don’t touch. This area is part of both the California State and Federal Marine Reserve. Away from the reef, out across the sand, it is not unusual to see a bat ray.

I know you might be having dreams of stumbling across some gold at the wreck but forget it. Treasure and magic lie in the underwater scenery and marine life that is the Winfield Scott and its companion, Wizard Hat.

Skill Level: Novice and up

Entry and Exit: Generally easy and calm in a well protected cove area.

Conditions: Usually calm with little current but beware of surge.

Visibility: Consistently 30 to 40 feet but often much better in the summer and fall.

Photography: Good for marine life on the reefs outward from Wizard Hat.

Hunting: None. Part of a State and Federal Marine Reserve.

Cautions: Surge in Wizard Hat cavern. Do not touch any part of the wreck.