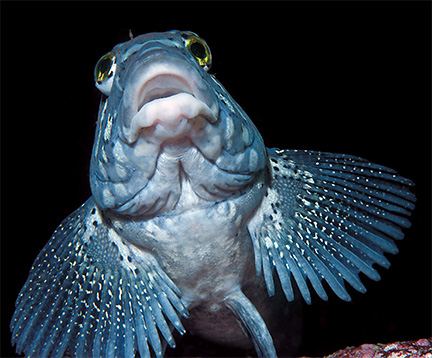 I enjoy the excitement of being the first diver on a new site. However, not every unexplored site offers a great dive, and sometimes you have to pick through the rock pile before you find the true gems. I also enjoy diving my favorite sites year after year to visit with old friends, witness any changes and embrace the predictability of a great dive. Diving a familiar site can be as comforting as sharing coffee with an old friend. One site I enthusiastically dive time after time is Eric’s Pinnacle.

Eric’s Pinnacle was first “discovered” by Captain Phil Sammet and Eric Minard back in the 1990s, and they decided to name it after Eric. It stands out as the most massive pinnacle in the Inner Monterey Bay, and is a favorite of not only myself, but also a great many regulars on Monterey’s fleet of dive charter boats.

Eric’s may be found offshore of the Otter Cove entry in Pacific Grove. This massive pinnacle is shaped like a rugged, mountain peak — imagine Cathedral Spire (in Yosemite National Park) underwater. The base of the pinnacle rests in 55 feet of water and the top is around 20 feet. It is steep sided with many side spires and deep cracks and fissures. The rock is split in several places and a giant fissure runs all the way through the pinnacle. The top and east side are covered with a thick carpet of strawberry anemones, sponges and other encrusting invertebrates. Cup corals cover much of the rock in other places. There are also a large number of shelled mollusks, including a few flat abalone.

This site is all about the abundance of photogenic fish. Eric’s is home to a number of kelp greenlings. Kelp greenlings nest during the winter. Like all greenlings, males have the role of “house husband,” and are the ones that guard the nests. A single male may guard three or more nests, which often have eggs contributed by two or more females. Kelp greenlings are normally shy and difficult to photograph. However, nest-sitting fish are very territorial and will often allow photographers to get very close. If you are lucky they also put on a threat display as they try to appear aggressive and larger than they really are. This provides a grand opportunity for photographers.

We also found a large number of colorful and photogenic painted greenlings, along with sculpins, sand dabs and black-eyed gobies. A modest-sized school of blue rockfish circled the rock.

On my last dive there were very large numbers of young-of-the-year rockfish. There were tiny blue, gopher, and vermilion rockfish. Some of these fed on plankton in open water, while others fed near the entrance of one of the many nooks-and-crannies of the rock, ready to swim to shelter should a predator get too close. Of course, there were a number of smallish lingcod out and about, and young rockfish were certainly on their menu.

Most divers spend their time exploring the main pinnacle, but it is worthwhile to explore the surrounding area. Here you will find large rocks and boulders on a relatively flat sand bottom. The rocks around the pinnacle are covered with a number of different kinds of encrusting invertebrates. There were large orange sponges encrusting some rocks, and colonies of yellow nipple sponges on others, while others were covered with orange tunicates. While we did not find many nudibranchs on our last dive, the yellow dorids we did find were busy chowing down on the nipple sponges. Look for large fish-eating anemones on the sides of the larger boulders.

Eric’s Pinnacle is well protected from the prevailing northwest wind and swell, so it is accessible on most days. It offers modest depths and calm waters for novice divers, but has an enormous variety of marine critters to keep photographers and more experienced divers happy.

Hunting: This site is within the Pacific Grove Marine Gardens State Marine Conservation Area. Spearfishing is permitted, but discouraged on or near “named” sites. All invertebrates are protected.