One of the most consistently thrilling, yet hazardous beach dives along the Southern California coast is at Point Dume. Here the Dume Submarine Canyon comes very close to shore, closer than any other submarine canyon. Couple this with a powerful oceanic current that literally side-swipes the point and you have an exciting underwater combination. Whales, large sharks, pelagics, and more pass by this point on a regular basis. But this is not a beach dive for the faint of heart. It takes a careful eye […] 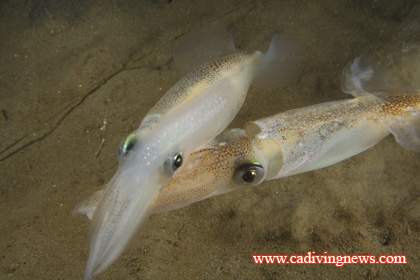 During the cold winter months in Southern California, there is one red-hot night dive spot that stands out against all of the rest—Vets Park, Redondo Submarine Canyon. Veterans Park is located approximately six miles west of the 110 freeway at the end of Torrance blvd. The locals call it “Vets” and it has become a night dive meet up for many dive enthusiasts, and a Mecca for photographers. Many have dubbed this a true California Muck Dive and for good reason. During the daylight hours […]

Underwater photographers looking for the ultimate macro dive site are in search of a gold mine, a motherlode. I know. My macro camera is big and bulky and I don’t get much pleasure out of swimming around a lot with it. I want to drop down onto site where I can shoot a whole roll of magnificent subjects in a 50-foot radius. I want a target-rich environment. San Diego has its fair share. NOSC TOWER By now, San Diego’s “Wreck Alley” is quite famous, especially […]

“Wow! What is all that?” exclaimed the out-of-state diver as he gazed across the vast biological soup extending to Point La Jolla. Kelp—one of the largest and healthiest forests in the state. It rolled in the swell. Birds rested on the massive surface clumps. Below the boat, you could see that the individual strands made up twisted vine-like strands buoyed to the sky, supported by grape-like air bladders with a single long leaf attached. Depending on the season, current climate mode and storms, this forest […]

Off the coastline of La Jolla in San Diego lies a large and very deep submarine canyon system with two branches that climb from the abyss to just within reach of shore divers near the La Jolla Shores resort and the Scripps pier lying one-half mile to the north. After a short swim from the sandy beach at La Jolla Shores, a set of buoys marks the approximate location of the upper reaches of the canyon. At about 30 feet the slope of the sand […]

When you mention shipwrecks and diving in California, most divers immediately think Yukon. But long before the Yukon was intentionally put down beneath the surface of the Pacific Ocean, there have been many ships taken below against their will. One such ship, I am embarrassed to say, I recently dived for the first time. The Star of Scotland, originally commissioned in 1918 as the HMS Mistletoe, lies in the middle of the Santa Monica Bay, just under two miles from shore. On a tepid Southern […]

In a current, the leading edge of the reef is always the most fascinating. There always seems to be a lot of fish and they are always bustling with activity. Fish jostle for the best position to pick tid-bits of food brought in by the moving waters. And there always seems to be a predator fish nearby to pick off those smaller fish that are less cautious. Rocks are covered with busy life that also capitalizes on food brought directly to them in the currents. […]

On my last dive trip to San Diego, I found myself sitting over the Yukon wreck preparing for my umpteenth obligatory dive on the sunken ship. Don’t get me wrong—I love diving the Yukon. And I have yet to fully explore the wreck (especially the inside). But this was a photo trip and had wide-angle photoed this ship upside down (actually sideways because that is the way she lays) and backwards. Great shots of the gun turrets, bow, divers in hatchways and more, but I […]

Where coral reefs abound, a typical shallow coral reef formation is what is known as “spur and groove.” With the “spur and groove,” fingers of reef extend out from shore with sand “grooves” in between. Sometimes the space between the reefs is very narrow making deep crevice-like passages. Life covered mini-walls often abound. The closest resemblance to this formation that I have seen in California are the reefs at Fisherman’s Cove, Laguna Beach. Now mind you, we do not have coral reefs in California. This […] 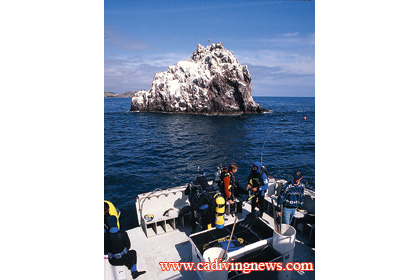 There is an old sailor’s superstition that the 13th day of any month (especially if it’s a Friday), is a jinxed day. On April 13, 1970, winds off southern California reached gale strength and the offshore seas were mountainous. For the liner La Jenelle and her crew of two anchored outside the harbor at Port Hueneme, the old seaman’s superstition of the 13th being a hoodoo day was proven again when the liner was violently driven ashore. La Jenelle was launched as the 1,000 passenger, […]